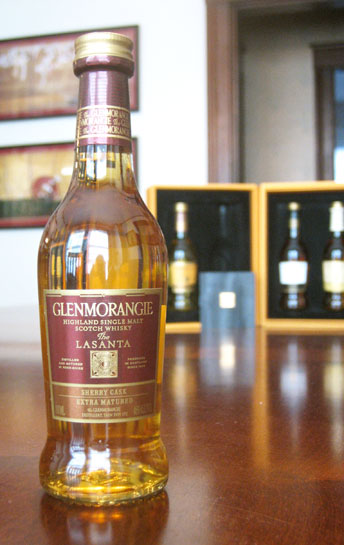 Tasting notes:
Here at Malt Impostor Central we always are concerned that the smell of cadavers or fermenting hummus might interfere with the gentle aurae emanating from the rusty old Campbell’s soup cans—not those immortalized by Andy Warhol—that we sometimes use to drink our expressions.  Fortunately, the nose of the ‘yumminess in a bottle’ that is the La Santa asserts that it is nothing less than petals falling from a floral display in a New York salami factory, or maybe a backwoods smokehouse in the Great Smoky Mountains in Tennessee.  Instead of a tuna melt, it’s like a Petunia Melt (soy cheese) for vegans: approachable, delicious, and morally non-reprehensible.  Or maybe the trailing wafts of the laurel wreath worn by Daphne as she ran from Apollo’s amorous advances?  There’s also a hint of the disturbing mixture of the scents of wood-stain, teak, and garish displays of flowers barely sensed while you are unfortunately taken for dead, and sealed in a coffin at a closed-casket ceremony.  (Not that that has ever happened to me.  Recently.)  At any rate, repeated sniffing uncovers a pleasant modulation of vapors like those boiling and leaking out of well-kept beakers and retorts in an eminently sane scientist’s spotlessly sterile laboratory.   The mouth evokes Douglas Sirk movies from the 1950s when the deep dulcet tones of Technicolor splashed across cinema screens the world ’round.  Oh, you say you want to know how it actually tastes? How…disappointingly…normal…of you.  It’s a perfect exemplar of its kind, a pleasantly tarrying tingle on the tongue, a $200 tip for a hotel doorman opening your cab door.  It’s being a roast filbert vendor at a World Cup event, or maybe just taking a sweaty fistful of grappa-drenched marcona almonds and surreptitiously pulverizing them in a supermarket coffee grinder.  It’s the clinging camphor on a pashima shawl delicately removed from a cedar closet, or the joy of opening a long-toted silk umbrella—with a bamboo handle, of course—on a day that began in sunshine, but eventually waned.

–On the scale of unjustly maligned figures of speech–
The Glenmorangie La Santa is the mixed metaphor–It’s a glorious sunburst of the distilled ichor of the Greek Pantheon of gods, a crescendo of rainforest swaddled in white velvet gowns, an omnipotent dragon of kitten-like cuteness sent by your benevolent daemon overlords to protect you.  If it doesn’t make you crazy with joy, you may as well crawl back into your womb of a cantaloupe core waiting to be served notice by the maitre’d of long-delayed delight.

—Our thanks to David Blackmore and the good people at Glenmorangie for the sample (though we should note that the bottle pictured above is not the bottle he sent us (he was more generous))!  Slàinte!