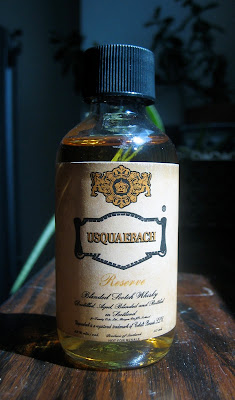 Tasting notes:
I fought with the other Impostors in the Maltcave for the right to review this dram.  (It may be a while until more postings come up, as John is languishing in the ICU at our local veterinarian’s hospital, while Stephen is buried up to his neck in the prairie in a red fireant hill. Every now and again, I go and pour some PBR on him and taunt him for being a hipster douchebag. I can’t do the postings, because my job as the off-site Legal Consigliere to the Remote Information and Systems Consultant to the Special Assistant to the Third Secretary of the Icelandic Ambassador in Mali takes more time than you might imagine.)  I fought because it was this very dram, almost twenty years ago, that opened my eyes to the possibilities of Scotch.  I was a confirmed wine esthete, and lover (but rarely an afforder) of fine cognac.  It was at a party in Auburn, Alabama, and I’ll say no more about that, except that drinking the Usquaebach Reserve then and there was revelatory.  (As was the porcupine leather corset the albino was wearing.) [John:  Bill!  That should be “person with albinism”!]
Anyhoo, the nutty nose evokes a saltwater taffy inadvertently coated in piano wax from a Steinway recently played by Evgeny Kissin. That is, if Evgeny Kissin had been playing Beethoven’s Kreutzer Sonata with Dirk Nowitzki (shout out to our Deutscher Freund, and the World Champeen Dallas Mavericks), and if he’d brought along a honey-drenched leather basketball that’d been sitting in the sun in a cedar forest.  A marvelous melange of flowers, a nosegay for a beautiful young girl on the way to her first prom.
Plummy (and I’m not Robert Parker, Jr. writing incognito—or AM I????), full-bodied: an inconceivable marriage of jasmine in the meadow and jazzmen at the Blue Note, circa 1955.  Spice: a crystallized sugar swill-stick, laced with cinnamon, rasping repeatedly against my soft palate.  If this be torture, I’ll not talk.
It’s a full-frontal finish, with time-delayed black pepper wisps rising up the gullet.  It’s a frickin’ autumn sunset in the mouth, softly westering!  It’s joy in a bottle!

Rating:
–On the scale of things that were wonderful in your youth, and are even better when you’re older–
The Usquaebach Reserve is Gilligan’s Island… No, wait, that’s not what I meant to write! John? Stephen? Which one of you did that?! Excuse me a moment.

–On the scale of things that were wonderful in your pre-adolescent youth, and are even better when you’re decades older–
The Usquaebach Reserve is riding a bicycle–Sure, it was a blast kicking your yellow banana-seat Schwinn all about town, but match that with winning your age class in the local cyclocross competition while mounted on your Carbon Team Ultegra steed.  Well, not that I’ve ever done that, but I’ll bet it would be a wonderful feeling.

Our thanks to Noah Goldstein and Usquaebach for the sample!