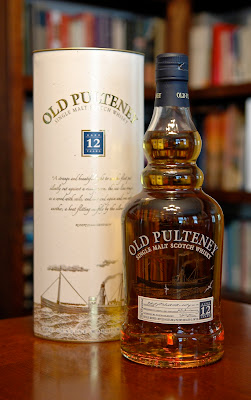 Tasting notes:
The distinctive bottle calls attention to the squat pot stills where this wonderful whisky is made; the ship on the label reminds us that the distillery was once accessible only by sea, being the northern-most distillery on mainland Scotland.  But if you’re reading this, it’s a safe guess to say that you’re not looking for facts.  You’re waiting for me to tell you that the nose is unmistakably that of hazelnut-oil drenched seabirds being cleaned with a tobacco-leaf brush.  It’s after the herring boom, you see, and the sailors have more time on their hands.  They haul up the birds—eider mostly—and mutter curses at the hazelnut oil supertanker and its recklessness so near the coastline.  Before long, it’s apparent that the grateful sea ducks, fattened with dried cherries, salted butter, and rum-soaked hardtack, don’t want to leave.  What’s more, they’ve taken up pipe smoking and walking in slow, looping figure eights on the foredeck.  This amuses the younger fishermen who, naturally, have grown fond of the ducks (though after the Michaelmas party episode they are no longer allowed to take them below deck).  All concede that the eider have been imprinted to the ship’s captain, who is a Milton scholar of more than regional acclaim and who takes similar afternoon walks, pipe in hand, as he clears his head from a morning of work on what will later become his remarkable monograph, The Heretofore Unrecognized Wacky Comedy of Samson Agonistes.  The Old Pulteney 12 is all of this: tangy oyster liquor, smooth nut oil, dried fruit, and erudition.

Rating:
–On the scale of interjections that ought to have wider usage–
The Old Pulteney 12 year-old is “waesucks”—  We like to think it captures well the pity felt toward the oil soaked birds, or the collapse of the herring industry, or even our estimation of anyone who fails to give the Old Pulteney 12 a try.
–John

Our thanks to Brian Johnson and InterBev Group for the sample!