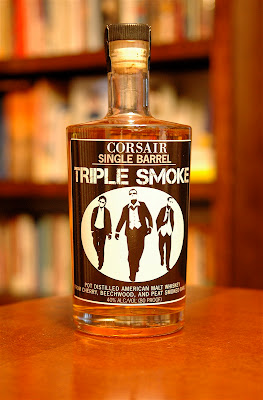 Tasting notes:
To say that the Corsair Single Barrel Triple Smoke is a singular dram would be a gross understatement–and as our readers know, understatement holds no truck with us here at The Malt Impostor.  However, it’s equally difficult to overstate the peculiarly precocious power packed into the preternatural panoply of flavors the Triple Smoke presents.  On the nose, it’s all tequila, as in a heavily salted, somewhat stale margarita–a Patrón Pyrite margarita, we’d say, since they really couldn’t have introduced tequila into the distilling process (could they?!?).  This dram is fast in the mouth like a really good lookin’ woman (I have to admit that I don’t quite know what that means, but I’ll be damned if it isn’t a tremendously apt simile here).  On the finish, it’s peppery and woody, with the beech, the cherry, and the peat each easily identifiable there.  They’re accompanied, however, by hints of smoked kippers or smoked trout–or perhaps smoked eel wrapped in ABC Beech-Nut Fruit Stripe™ Gum.  If this were a beer, it’d be one of those wild limited 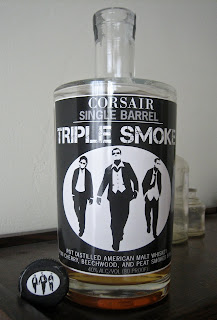 editions Dogfish Head puts out now and again (think spittoon-aged My Antonia with algae infusion–only much, much better than that would be).  In that way, this dram is craaazy experimental–like Marie and Pierre Curie playing horseshoes in a completely darkened room (ok, not sure what this means either, but again, it’s too spot on to pass up).

Rating:
–On the scale of somewhat uninteresting games made only slightly more interesting by adding in the element of danger–
The Corsair Single Barrel Triple Smoke is radioactive horseshoes–a far cry better than tic-tac-toe Russian roulette, but perhaps just slightly behind hand-grenade croquet–provided you get to go last.

–Our thanks to Darek Bell and Corsair Artisan Distillery for the sample!