[This is one Master of Malt sent us just to get us to review it for them (see our Disclaimer here).  We took so long getting to this one for review that it is now sold out.  To Natalie and the good folks at Master of Malt, please accept our apologies–we just flat blew it on this one, and we will certainly do better on future posts.  To our readers, we apologize to you, too, but we also would like to point out that in this story lies a valuable lesson about buying stuff from Master of Malt:  if you’re thinking about buying some cool, rare dram from them, FOR GOD’S SAKE, DON’T WAIT!  BUY IT NOW BEFORE IT GETS AWAY!!!  Again, sorry for our tardiness.  We hope you enjoy the review nonetheless.] 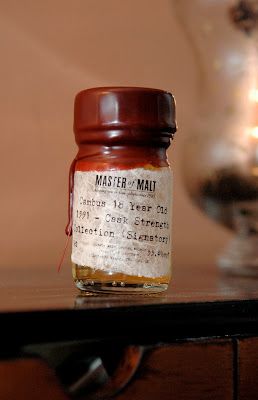 Tasting notes:
A connoisseur’s delight in the nose, as it’s nothing so much as wandering around the large mammal section of the zoo, or more precisely, an earthy-tinged, well-tended cattle kraal.  If it were 120 years ago, I might say that it was a psychotic Boer hausfrau’s magnolia tree and gardenia-girded barnyard besmattered with little bomblets of goose poop.  As it opened up, distinct traces of mercury-flecked bauxite, surrounded by the swirling phantasmagoria of a mini-vortex of hellspawn and Grande Dame. [Stephen: Bill! That neither rhymes nor is it alliterative!]  If one can imagine a domestic ibex drenched with honey-clover–and evidently John can–then one has a concise capra genus/savory combination to peg the scentsuality of the schnozz.
The mouth is betrayed by the nose, because it’s as if the nose was on a yellow baboon, and the mouth was on a koala a continent away.  That is, a koala smoking a clove/menthol cigarette also laced with anise, ground eucalyptus leaves, ammonia, and flaming tar from the La Brea tarpits.  This expression was distilled in 1991, and Cambus shuttered its shingles in 1993.  One is tempted to draw a correlation conclusion, but one cannot conclusively conclude causation from correlative collusions or creative collisions.

Rating:
–On the scale of mammals that have no regard for taste, scent sales, or anything–
The Cambus 18 Cask Strength 1991 (Signatory) is The African Honey Badger–It’s cited in The Guinness Book of World Records (2002) for being the most fearless animal in the world, and as nature commentator Randall will repeatedly inform you in this spectacular NSFW video, honey badger don’t give a sh*t.