[This is one that we purchased for ourselves a good while back and took our time getting around to reviewing it.  Apparently, it was a very good while back now, because unfortunately, this Bruichladdich expression is out of stock at Master of Malt. Sorry about that.  We hope you enjoy the review nonetheless.] 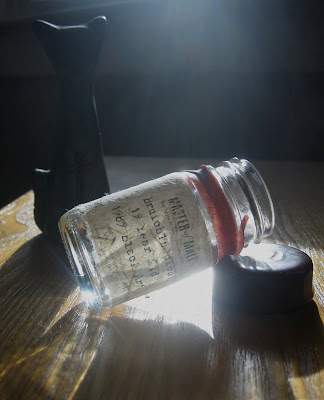 Tasting notes:
I count myself a mere dilettante in necromancy, owing to the inconsistency of the results I’ve been able to achieve:  summoning my great grandfather’s soul only to trap it in a dish towel was an especially low point.  But confronted with the Bruichladdich 1989 Black Art, I found myself inspired to focus my efforts in an attempt to hone my admittedly spotty skills.  Gazing at this dram in the glass, the candlelight from my pentagram accentuates its red, cognac color and reminds me of failed apprenticeships, first as an alchemist (in particular, trying in vain to dissolve copper pennies in turpentine) and then as a cook (in particular, pickling beet skins in Magic Hat #9, to dubious effect).  The nose, with its hints of chardonnay and apple Jolly Rancher candies, is simply delightful:  it is not unlike conjuring up the Genie from the Disney movie Aladdin, in that it sings, does impressions, and generally makes me laugh.  This dram smells so good, in fact, that I just want to dip cotton balls in it, stuff them up my nose, and walk around and do stuff–and I would do that, too, if only it weren’t the case that the last time I did something like that, I ended up summoning the ghost of L. Ron Hubbard into my kitchen and had to ritually sacrifice my goldfish to make him leave.  At any rate, the mouth and the finish do not come close to living up to the wanton joy of the nose:  instead, the mouth is powerful, over-licorished, and a bit manky.  The overabundance of licorice on the mouth relit the alchemist fires in me and prompted me to try sipping this dram through a black licorice twist, just to see if an incremental increase in licorishness were even possible.  My cat promptly keeled over, dead as a doornail.  I probably should have stepped out of the pentagram first.

Rating:
–On the scale of dead celebrities I’d like to be able to meet via a séance–
The Bruichladdich 19 Year-Old 1989 Black Art is Marlon Brando–I imagine he’d be intimidating, and I have no idea what I’d say to him, especially if offering him food would do no good, but damn, Brando was cool, even in the bloated end.