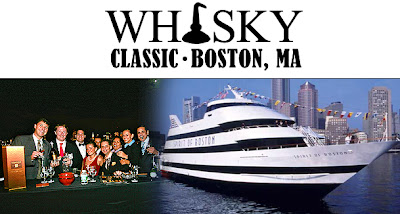 When this Impostor thinks of combining “alcohol” and “boats,” I usually rifle through the altogether depressing statistics assembled by the Coast Guard (more than 50% of recreational boating accidents involve alcohol), envision dead manatees, or, by virtue of making a mental U-turn, I think of Gilligan’s Island, The Poseidon Adventure, and The Love Boat.  Although the weather was inopportune for a May night, the Whisky Guild’s Boston Whisky Cruise three hour tour was fortunately akin to taking the Love Boat—minus the romance—and as far as I know, not a single inebriated person fell off the boat, even if plenty of us were reeling around in besotted ecstasy.
It’s tough to know where to begin, so perhaps I’ll start with John.  After an ignominious beginning to the evening (he arrived at the Cruise without his wallet and thus without any ability to prove he was, in actuality and ironically enough, an Impostor), John quickly managed to find his bliss.  It seems to me that every five minutes or so, he’d turn to me beaming, put his hand on my shoulder (and I don’t know whether that was as sign of affection or just to steady himself), grin broadly and say, “This is the best night of my life.”  [John:  I can assure you, Bill, that as a happily married man, I did not say it was the best night of my life.  Especially in view of the fact that my wife is an occasional reader of this blog, I shall insist that I did not say this.] I would invariably beam back, and since I keep a running file on the best nights of my life, I’d rejoin, “This is actually the 18th best night of my life: It’s made the top 20!”

All this to say: It was extraordinary good fun.  The pourers were delightful and informative (meeting Robin Robinson, Peter Zimmerman, and LJ Heffernan were particular treats, as was catching up with our friend Noah Goldstein), the food was
superb, and the selections of expressions were outstanding. Except for a Laphroaig 10 bottled in the 1960’s—shades of Mad Men—I hardly had a dram aged less 17 years. Blah, blah, blah: There are younger scotches I adore, but the older ones are certainly rarer, considerably more expensive, and possibly where the real expertise and creativity of the Malt Barrel Nosing and Mixing Masters find their greatest outlet.
Although it is all a happy blur to me now, like most of my college years, and my high school years, and sadly, even my elementary school years, there are a few standouts for me. Note that an omission from this list means nothing except that the cliffs of my memory are inadequate to the task of standing neuronally firm in the face of the erosion occasioned by many, many lapping waves of the water of life. In no particular order, I was delighted by the 1991 Balblair, the Compass Box Hedonism, the Brian Dvoret’s running a latitudinal tasting of Scott’s selection bottlings, starting with the Lowlands and moving to the Highlands, including a sublime Glenlivet 1977 and a great Bruichladdich 1990. 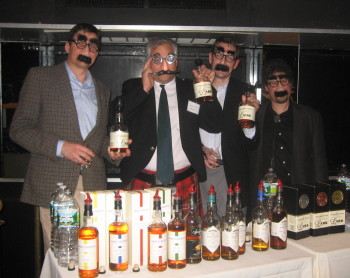 The aforementioned 1960s vintage Laphroaig 10, the Oban Experience (especially the Oban Distiller’s Edition), my beloved Highland Park 18, the Ardmore 30, the Laphroaig 25, the Bunnahabhain 25, the Scapa, my old standby Usquaebach Old Rare in the Flagon, and most especially, the GLoDs: Cathy and Katchlin, the Glamorous Ladies of Diageo.  [John:  I would add to that list the Lagavulin 12, the new make/white dog from High West, and the Berkshire Mountain Bourbon.]  [Stephen:  I’d add the High West Bourye, the Compass Box Orangerie, and the Glenfiddich 21.  And I second the GLoDs comment:  lovely women and sparkling conversation.] [John: Ok, and the Bushmill’s 21, and the Lagavulin 21, and the High West Rye 21.  All of them great, great whiskies.  Oh, and I have no idea what you’re talking about with the Glamorous Ladies.  No.  Idea.] 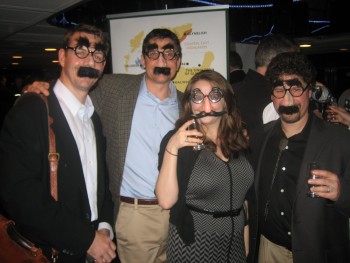 Overall, it was an outstanding event Jeffrey Karlovitch and the Whisky Guild put on.  The only thing that could have made the night more perfect was winning the raffle, and walking away with the Talisker 25.  Well, that and if only Stephen had managed to avoid crashing the Maltmobile on the 16-hour drive back to the Maltcave.  [Stephen:  Well, Bill, I wasn’t the one who decided it was more important to attend that conference on “Cricket’s Sticky Wickets” than to get the Maltmobile in for its 45,000 mile scheduled maintenance, which totally would have brought to light the brake problems we encountered on the way home.]  [John: The only brake problems we had on the way home from the Cruise was the problem you had applying them when that stray beefalo stepped out into the road.  God, what a mess.]  [Bill:  But what a great cookout we had the next day as a result…  Mmmm…beefalobecue…]

Our thanks to Jeffrey Karlovitch and The Whisky Guild for their tremendous hospitality and for a great event!