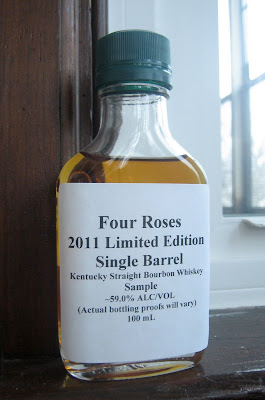 Tasting notes:
I lean in carefully to nose this beautiful bourbon, and it’s like crushing a lily boutonniere against a pressure-treated wood fence post on a misty morning.  The herd of emus are long departed but the diffused sunlight dappling the field fills my morning coffee cup with torpor and ennui.  As so often in life, the fun begins on the mouth.  Scorching on the tongue like VapoRub™ Pop Rocks™, or an elfin Zeus raining down thunderbolts on my hubristic tastebuds.  My eyes tear up like the time I took the needle nose pliers to my ear hair.  But, but, but… but wow!  What gigantic flavor opens up in the wake of the attack!  Clover, straw, cedar shavings from a neglected Chinchilla cage, WD-40, and green peppers sautéed with kale and peanut oil on a propane grill with a balky bleed valve.  Oh, and the clover is covered in Africanized bees.  The finish unfolds like an absurdly long flag at some unpronounceable city’s soccer match.  And with it unfolds a bizarre reverie, an uncanny déjà vu over wholly new experiences.  First I’m parasailing in the Florida Keys behind a fan boat in the Everglades; I’m high enough to see the curvature of the earth, but not so high that I can’t attempt vainly to motion the boat away from the manatees. But then I’m inside

a saltwater taffy plant as the family’s disgruntled scion uses the third shift to infuse packing peanuts with sashikomi soy sauce.  Wait!  Now I’m in a Virginia meadow pulling a Union Colt .36 from a Confederate holster as black powder smoke swirls around me in a crackling cacophony.  Some jackass brays at me in self-important fury about “authenticity.”  I try to explain my position but the bulge of my supersoaker under my Gore-Tex anorak stops me.  Authenticity.  I may not have it, but Four Roses does.

Rating:
–On the scale of surprising facts about emus–
The Four Roses 2011 Limited Edition Single Barrel is they lay British Racing Green eggs–Less surprising, then, is their non-monogamy, the fact that males can be distinguished by the sounds emitted from their inflatable neck sacks, and that their testicles double in size during mating season.  [Editor: yes, that’s inflatable neck sacks.]

–Our thanks to Nick Clark and the good folks at Four Roses for the sample!