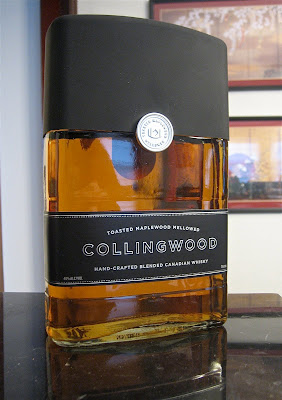 Tasting notes:
Since there is no such thing as a characteristically Canadian whiskey bottle type, it’s hard to say that the Collingwood Blended Canadian Whisky goes against type in that respect.  Otherwise, however, it’s safe to say that the Collingwood is essentially Canadian.  On the nose, the maple plays prominently, but there are strong pecan notes as well.  Nose it for a moment more, and you get much deeper into the heart of the country:  there are hints of rotting icebergs (and yes, that is different from merely melting ones), of maple fermenting in the sap bucket after being left on the ground and forgotten at the sight of another human being, and of very lost penguin feet.
The mouthfeel is watery at first, but then enticingly sweet, and then you get the kick in the uvula–an experience I suspect is not unlike bending down to drink from a pure, clear, remote Canadian stream, just before realizing that you’re standing behind a full-grown bull moose, who then proceeds to donkey kick (or would that be “moose kick”?) you in the face, sending you flying across to the opposite bank.  But that description is meant to connote more about the uniqueness of the Collingwood rather than the relative pleasure associated with drinking it:  it’ll catch you by surprise in some ways, and you’re not likely to forget it anytime soon.
Add a little water, and the nascent sweetness from before comes into full bloom:  initially notes of re-hydrating dried out, but hardly chewed, bubble gum, followed by the subtle perfume of those flowers in a steeping pot of tea.  Even with some water, the sugars in this dram are evident, leaving legs in the glass reminiscent of Braille–or Her Majesty’s gams sans hosiery.  And if the preceding comment hasn’t made it clear already, this dram also has an ancillary and unexpected effect as it cruises toward the finish: it has our moral compasses spinning, as if we were nearing the Arctic Circle.  On the finish, the Collingwood is a deep, rich syrupy mouthful.  If honey aged, it would feel like this in the mouth.

Rating:
–On the scale of classic mounted Canadian characters–
The Collingwood Blended Canadian Whisky is the Royal Kilted Yaksmen–so much edgier than Dudley Do-Right or Klondike Kat, these guys capture the full panoply of Canadian splendor…or at least they refer to it (even if only disparagingly in places).  They’re in the neighborhood of the chorus of “I’m a Lumberjack, and I’m OK”.  Maybe not exactly on a par with the chorus, but in the neighborhood of such greatness, and that’s saying something.

–Our thanks to Svend Jansen and Brown-Forman for the sample!