Bill:  As the St. Pauli Girl ad suggestively suggests, you never forget your first Single Malt and Scotch Whisky Extravaganza. However, as I detailed in our post from last October when the MI team “did” Boston, I actually did forget an hour of the evening, or was maybe kidnapped by aliens and probed…about NORAD SAM payload specifications.
Upon arriving at the Roosevelt Hotel in New York last Wednesday, we enjoyed seeing the preserved corpses of Teddy, Eleanor, and FDR in their crystal tombs.  [John: Bill! That’s Lenin’s corpse in the Red Square in Moscow!]  Ambling up the spiral stairs to the mezzanine we were graciously met and eyed askance by Maddie Shayne, whose demeanor chilled just a wee bit when we asked to see Gabby (who turned out to be, naturally, her daughter). We’ve fooled Gabby now for close to a year; she responds to our emails, pretends to laugh at our jokes, and alleges to find us to be at least a small cut above the scum of humanity. We even got her to wear a pair of Impostor Glasses last October!  We were happy to see Gabby, she kept up her pretense of being happy to see us, and all left with their dignity intact. We met Alan Shayne, the President of the American branch of the Single Malt Whisky Society, and it became clear to us that Gabby inherited the best of all the many wonderful qualities from both her parents—although going to 18 years worth of Extravaganzas might have something to do with it, too.
We ran into our occasional co-imbiber Joshua “ManHatton” of the Jewish Single Malt Whisky Society, and delighted again in bending elbows, sozzling, and nattering about the minutiae of tasting with him.
Gabby checked us into the pre-Extravaganza Whisky Panel of Droll and Mildly Buzzed Industry Insiders and Experts, who even deigned to answer two of our questions. My question wondered about the prospects of greater availability of 50 ml nips of top expressions, and it took all of three seconds before the panel collectively shot down the notion: Too expensive to bottle them, and nobody (other than we) would buy them. I maintained a brave face, but wept inside, a broken man, an outed Impostor. 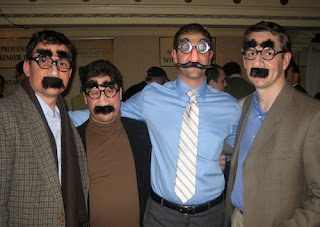 We next laid down a stomach-lining alcohol-absorbing layer of food, then descended on the Whisky! It was nice to see Jerry Zimmerman pouring the Classic Cask, but the table was already swarming with eager tipplers, sots, souses, lushes, swillers, and dipsomaniacs making it hard to say much more than a quick “hello.” We met Aron Silverman (pictured above) pouring for the Society and succumbed to the blandishments of their bottlings. The Magnificent Drambersons they concoct!
Besides the usual suspects, the Glenmorangie Finealta was the standout for me. My mouth was recovering from a salvo of peat explosions when I drank it, but as I continued to sip, the delicacy and charm of the expression gently asserted themselves. The rep pouring it told me that “Finealta” meant “Elegant” in Gaelic, but I prefer to think of it as “Fine High.” But I am crass, base, and untutored in the ways of society.  Then I had a few desserts, then a final dram or six to close out the evening, and responsibly left the driving to Stephen.  Back to our undisclosed location, our secret bunker, our MaltCave, where we live alternate lives, waiting for the next MaltSignal.

John:  My take:  Took a neat train ride.  Then wow, look at all the tall buildings!  Wow, look at the beautiful hotel!  Wow, there’s lots of whiskies here!  Lots of them taste good.  Nice people around.  Have to dash back to the train station.  Bye!  [Bill:  Some manage to say so much with so little.]

Stephen:  I defer to Bill on the evening’s details, but I will say this much:
As the one who was stupid enough to volunteer to drive the three of us back from the Extravaganza, I eat heartily, tasted very selectively, and mournfully dumped out more of each 1/4 ounce pour than I drank. Looking back on it, I willingly disposed of a collection of whiskies that would have married well into a world-class dump dram (I prefer that term, though our good friend Joshua Hatton has earned some renown for his “dregs drams”). Ah, lost opportunities and, even worse, wasted whisky…

But the pleasures of this Extravaganza extended well beyond the tastes: as Bill mentioned, we were very happy to see Gabby Shayne again, but also to have the chance to meet SMWSA President Alan Shayne and his wife Maddie–and to find that that fruit didn’t fall far from the tree.  It was great catching up with fellow blogger and soon-to-be master blender Joshua Hatton [watch this site for more on this in coming days], Jerry “Zim the Great” Zimmerman, and the clutch Noah Goldstein from Usquaebach (you know what I’m talking about here, Noah–and thanks!). 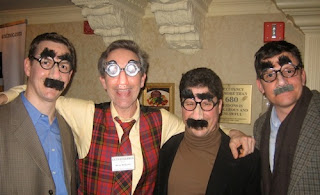 And we had the distinct pleasure of meeting and getting pictures with SMWSA Ambassador Aron Silverman and Spike McClure (pictured right) from Atlantic Wine & Spirits, who will doubtless end up writing a guest post for us some day, or at least collaborating on one.  Spike was so excited to be photographed with us, he didn’t realize that the mustache had fallen off of the Groucho Marx glasses we’d given him (and by that point, mysteriously, John’s mustache appears to have turned gray). Other notable meetings included Yoshi Morita from Suntory,  Nathalie Phillips from Skyy, Julia Rogers from Moët Hennessy USA, Ross Hendry from BB&R, Simon Brooking from Laphroaig, and Peter Silver from the incomparable Malt Maniacs.  In other words, at the Extravaganza, as in just about every other setting, the whiskey drinking experience was heightened significantly by the presence of friends–but I’ve made that point before.
All in all, it had little of the reckless abandon or feckless perambulation characteristic of our first Extravaganza, but we all agreed that we got more out of this one.  For those of you contemplating attending one of these events, my advice would be to do so soon and often. With the overwhelming array of choices the Extravaganza lays out before you, you need to practice making the most of it. So get out there and practice…hard. It’s sooo worth it.