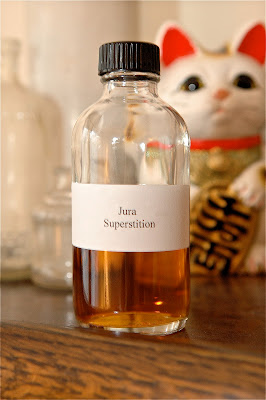 Tasting notes:
On the nose, this dram is throwing salt over one’s shoulder, if by throwing salt over one’s shoulder you mean lemongrass in a surreptitious mélange with lemon Cheetos® or perhaps with a wedge of Mini Babybel® cheese dried on a vinyl car seat.
The mouth offers the liveliness of a rabbit’s foot (still attached and kicking) but also the inorganic sting of that same rabbit’s foot later preserved in liquid benzene, with a few tablespoons of molasses fermented in tobacco barrels added in for good measure.  The accumulated effect is loamy and gloamy, but it doesn’t blow me…away.
The finish brings a mix of brewer’s yeast, pixie stix, and angst activating in  your mouth, not at all unlike the sensation of a hole opening up and draining an entire lake.  Or, to put it another way, the finish is like a penny found standing noncommittally on its edge, a horseshoe with no laces whatsoever, or a black cat that can’t be bothered to get off the sofa to cross your path.

Rating:
–On the scale of things upon which custom holds one should make a wish–
The Jura Superstition is seeing a shooting star–Your wish likely won’t come true (though, alas, the same is true of all things in this category), but at least you just got to see a meteoroid burn across the sky as it became a meteor.  It’s not quite blowing out candles on a birthday cake (in that case, you get cake!  And it’s your birthday!), but it’s light years better than blowing an eyelash to the wind.

–Our thanks to Lyz Nardo and the good folks at Jura for the sample!