[This is another dram the good folks at Master of Malt sent us.  They asked for an honest review and little else in return.  See our disclaimer on this here.  Thanks again, Natalie!] 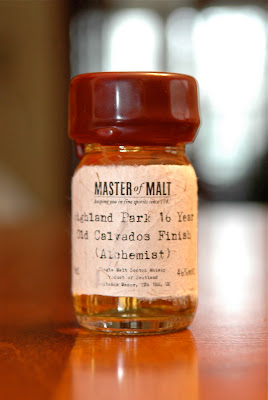 Tasting notes:
The nose is like the best frosting ever:  real unpasteurized Irish butter made from the cream of cows that ate only green, green grass in a light mist, their bovine eyes blithely trained on a perfect double rainbow over the distant hills, where pot-distilled liquid gold was being drunk by merry, merry leprechauns. Sugar refined from cane grown by a co-op of luscious vestal virgins residing on an unlisted island known only as being in the Tropic of Capricorn. The blending of the softened butter and the sugar performed by the clarified ghosts of Julia Child and M. F. K. Fisher using a large shiny copper bowl and an adamantine whisk.
It’s brilliant in the mouth: transubstantiated, super-lubricated, fermenting prize-winning orchids turning you into a mastadon. [John:  Bill! A mastadon?!?] It’s canned sweetness, but not treacle, not goo, and not the last three minutes of any Stephen Spielberg movie. It’s bobbing for apples in a vat of Calvados. It’s hay harvested from the amber waves of grain of yesteryear, when we all still believed in magic. It’s a panda bear bower hidden in a fold of the mountainous regions of southwest China, lined witha woven mesh of (imported) eucalyptus and bay leaves. It’s like sucking jasmine nectar through a straw made of straw while gently masticating a piece of the most-loaded pound cake imaginable.
If I hadn’t just tried to write about it, I’d say that the Highland Park 16 Old Calvados Finish was beyond words. And since words are at best a pale shadow of reality projected upon the screen of our neuronal networks by our central scrutinizer, I’d say to go get a dram immediately.

Rating:
–On the scale of things that never had their finish adequately described (or in the case of this review, described at all)–
The Highland Park 16 is indeed a full-on double rainbow all the way across the sky–What does it mean? Why can’t we reach the end? Does it even matter?