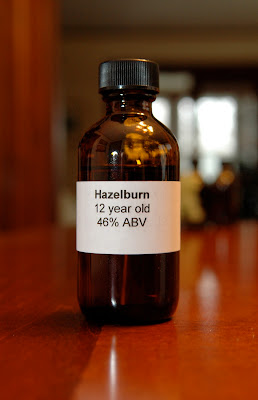 Tasting notes:
The oenograph, Eric Asimov, recently called for reducing the wine critic’s lexicon to two words: sweet and savory.  Purple prose and precious predicates fail to convey information.  “Fixating on exactitude,” he wrote, “is a fool’s errand.”  This being written in the newspaper of record (and now the newspaper of pay wall) I was impressed, and  resolved to clarify my reviews by organizing everything in accordance with two categories; henceforth, malts will be classified either as “belonging to the Emperor” or “those that from a long way off look like flies.”  Initially, I felt I’d stumbled across the key.  The breakthrough was clear simply by noting my tremendous progress on my soon-to-be-contracted Grundlegung zur Maltephysik der Scotchen.  But a single pour from the Hazelburn 12 woke me from my reductivist slumbers.  The unmistakable colors of sherry maturation in the glass let loose a logorrhea for which there is no loperamide.  Nuts on the nose.  Cinnamon-dusted chestnuts eaten furtively in an attic rarely visited.  Is there butterscotch as well?  More like a peppermint-butterscotch Mento ejected from an Orangina bottle refilled with carbonated bong water and funny car fuel.  Smokey but without smoke, seawater without brine, perfectly pleasant and agar-reable.

Rating:
–On the scale of fitting names for logophobic journalists–
The Hazelburn 12 is Coco Krumme–Like Asimov, she is suspicious of wine critics that pepper their prose with obscure OED terms.  But with a name like Coco Krumme, it’s obvious she’s carrying a lot of verbiage baggage.  Maybe Krumme and Asimov need to move from wine to the water of life, or kiss the Blarney Stone, or failing that, give up their jobs as critics and instead serve as magistrates. Then they may restrict their few words of judgment to “Guilty” or “Not Guilty” and let the rest of us enjoy our drams and our dreams, our poetry and our punditry.

–Thanks to Andrew Shand and Preiss Imports for the sample! Slàinte!