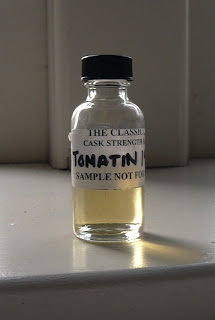 Tasting notes:
Noses like a box of Good ‘n’ Plenty that’s been laced with cloves and clover, and sprinkled with anthracite. The legs on the glass remind of nothing so much as colorful lines on the output of a mass spectrometer. And yet, it is angelic; round as a Christmas ornament, bobbing gently on the limb of the tree from the wafts of cherubim wings flitting about the house, lighting beeswax candles, humming songs like Brad Mehldau’s version of Paranoid Android.
Sipping it inflames the senses; it’s a veritable flamethrower spewing fiery gauntlets of love. Or is it more like the heat blast of walking into a sauna in Iceland after gamboling about with the elves amongst the glaciers, geysers, and moraine? Since the fire ultimately becomes more rainbows, it can be nothing other than…

…Dante’s representation at the end of the Paradiso of the Holy Trinity as interlocking rings of light that are colored beyond color. At any rate, that’s the way the tongue and mouth feel, and I’m sticking to my story. And Dante’s.
Finishing, it’s a combustible colonic for the tongue, a cherub flatulating scents of lemon groves, thick honey, and sage perfumes. Heavens above, it’s the condensation of an ambrosial feast distilled by a wonderfully mad chemist. After a minute, nothing more and nothing less than a sponge just out of the cellophane, but in a good way, like a super nice sponge in a gleaming stainless steel kitchen cleaning up a few drippings from the bacon souffle and hazelnut torte. The finish of this dram leaves the drinker morally improved and sensually depraved: Another sign of a beneficent Lord. It’s the Forrest Gump of Classic Casks; it keeps on running and it won six Oscars™.

*–Our thanks to Jerry Zimmerman for kindly passing on this sample to us.  In our book, that makes him Great.  Slàinte, Jerry, and we’ll see you at an Extravaganza soon!