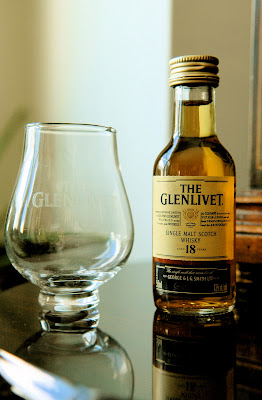 Tasting notes:
On the nose, a lemon studded with cloves that’s just been removed from the cavity of a roasted turkey and is now clutched in the oven-mitted hand of a bedraggled housewife as she menaces her husband with said lemon, threatening to place it not-so-carefully into the least forgiving of his orifices, for having asked four times how long it would be before dinner would be ready.  However, just beneath that dramatic scene runs an enduring softness and sweetness, embodied in undercurrents of currants or sultanas or, on a bad day, just raisins.  But such are the complexities of long-term relationships and of good whisky.
In the mouth, it’s super nice, like a paper bag soaked in a slightly briny cough syrup. That doesn’t sound particularly super nice, you say?  Well, what if I upped the ante and said that the cough syrup as well as the paper bag in question were both made for billionaires?  I thought so.  Of course, both the bedraggled housewife and her husband wonder at their good fortune at having such a high-end bag (soaked in such high-end cough syrup) resting upon their kitchen table.  At the same time, they wonder why their good fortune had to take such an atypical form.

On through to the finish, this is just what the doctor ordered.  As for what exactly she ordered, this dram is much more morphine drip than colonoscopy, our sometimes happy couple is thrilled to find.  There is also a faint, refined woodiness here, as one might find in a master woodworker’s shop in which someone acts as a scrub nurse in surgery, meticulously vacuuming up all of the excess sawdust as it’s produced.  As the husband begins to fancy himself in the role of the master woodworker, his wife snaps him out of his reverie by snapping, “Just forget that right now.  No way in hell I’m going to be your scrub nurse, not even in a woodworker’s shop.”

Rating:
–On the scale of classic sparring couples—
The Glenlivet 18 is Nick and Nora Charles of Thin Man fame–Ricky and Lucy achieved greater fame, but there’s no matching the wit or the class of William Powell and Myrna Loy.  -Is he working on a case?  -A case of scotch!  Pitch in and help him!

–Our thanks to Ryan Caswell and the good folks at Glenlivet for the sample!