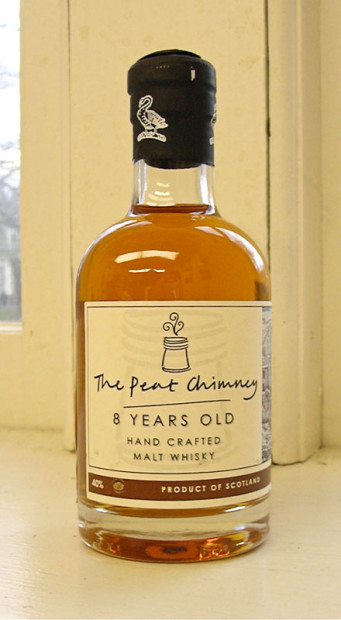 Tasting notes:
The nose on this dram is smoky with strong orange notes, bringing to mind a scene in which a band of hippies, after hearing that smoking banana peels could get you high, found that they had none, so they tried smoking orange peels instead…and then chased that by passing around a bottle of Amontillado.  On the mouth, we fast forward to those same hippies now ensconced on the roof, taking turns huffing the top of the chimney after having stoked the fireplace with DuraPeat® logs.  The mouthfeel is round and soft as Kris Kringle’s butt, which is exactly what those same hippies think they see jammed a ways down in the chimney as they huff away.  The smoke lingers like a spirit haunting the mouth—without going so far as to be a poltergeist that wrecks the palate.  The finish is strong but gentle, like a jumbo jet screaming in low over the rooftop without jostling a single unsuspecting hippie.  Also on the finish are flavors of barbecue pork, just strong enough to lure those same hippies down from the roof.  Add a little water, and it opens up to something different:  hibiscus-flavored cigarillos, honeysuckle, clover, and a powerful sense of well-being, like the bouquet of aromas our crew experiences as they finally retire to an open field, where they lie in the tall grass, smoke, and imagine world peace.

*Special thanks to Susan Colville, Cameron and Wilma for sharing the love with us.  Slàinte and Happy New Year!