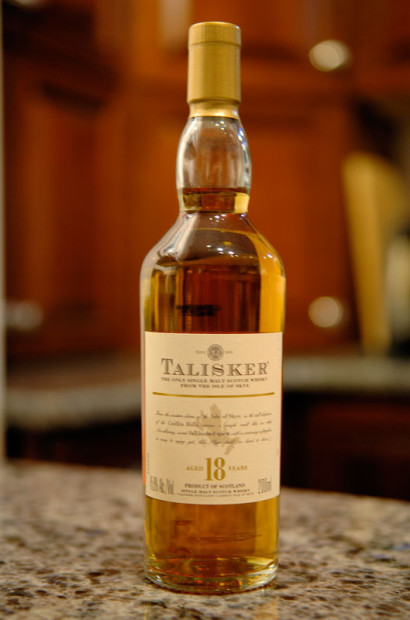 Tasting notes
Alas, there is no Burns Supper in the cards for us here at the Malt Impostor on this Burns Day.  As close as we’ll come to a feast of haggis, tatties, and neeps on this eve is a modest dinner with our loved ones and a large quaich full of this lovely dram (we’ve all convinced our significant others to allow the presence of the quaich on the dinner table on this one night of the year).  But with this dram, we can console ourselves.
On the nose, the Talisker 18 offers heavy peat mixed with raw wheat (but not boiled beets, rotting meat, saccharin sweets, or neat-to-eat-treats).  In fact, the raw wheat is so strong, you feel trapped within Wheatfield with Crows–which is to say, if you weren’t drinking this dram, you’d be contemplating suicide.  Or perhaps better, especially on this Burns Day, you feel as if you are comfortably seated at the table of Dinner for Threshers, even though there is no haggis there.
On the mouth, you have the sensation of something slathered in honey, and what’s slathered in honey, oddly enough, only reveals itself a moment later:  roast hazelnut “nutmeat” so pungent, one thinks they took the Fra out of the ngelico.  Then comes the surprising flavor of uncorked escargot.  As the mouth sensation descends into the throat to usher in the finish, suddenly you recognize a rather distinct sensation:  of an ice climber rappelling down a waterfall, stabbing his crampons into, well, frozen mercurochrome.
On the finish, you detect gypsum wallboard, skim-coated with plaster and Listerine™, followed by the peculiar, but altogether pleasing taste profile of swallowing a gummi tequila worm.  At that point, the dram elevates the palate, and elevates it amply, even though it leaves the lower jaw behind in the process.  Still, you don’t mind at all, not with this dram.  As you wander about like a decerebrated frog, from parts unknown comes the brilliant idea:  add some water.  Doing so opens up roundness and caramel:  imagine a playground slide with caramel and honey pouring down it, and you’re in the vicinity of the experience the Talisker 18 provides.  Just hold on to your maxilla.

Rating:
–On the scale of dinners many would do well to avoid—
The Talisker 18 is the rehearsal dinner–Begin with two completely separate families.  Add to the same room.  Add an open bar and stir.  Then sit back and watch the fireworks. (Those in Appalachia, as those at high elevation often must adjust oven temperatures or baking time, should adjust this recipe to account for differences in the basic ingredients.)