Disclaimer:  Master of Malt sent us these to promote their Drinks by the Dram offerings, and in return asked only that we post a link to their home page, a link to the page for the expression itself, links to their Facebook and Twitter pages, and a mention (like this one) of who sent us the sample (Thanks, Natalie!).
It’s important to note that they stipulated nothing else with respect to the type or style of review and they asked that the reviews be independent and unbiased.  We should also note, however, that no one who has ever sent us a sample has asked us to review that dram in any way other than as we’d like.  Still, if you are worried about our journalistic integrity, then you are:
a) taking our “tasting notes” much more seriously than we do,
b) probably having a very hard time figuring out our rating system,
c) likely not getting invited to the good parties, or
d) all of the above.

We’ve reviewed Drinks by the Dram samples before (ones we’d bought for ourselves).  You can find those reviews here and here.  Now on to the review… 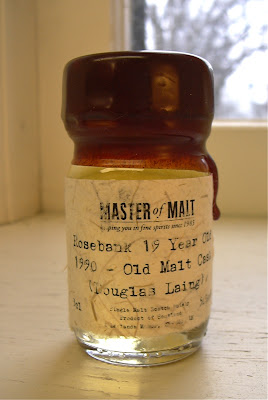 Rating:
–On the scale of rivers to go punting on–
The Rosebank 19 Old Malt Cask is the Thames in Oxford. Crew is also an option, but just imagine sipping a dram of the Rosebank 19 on a sunny day as you and a don are punting along as the Magdalen grove, Merton field, and Christ Church meadows gently slip past. It’s infinitely preferable to punting in the new Meadowlands stadium. (Surely you guessed that American football was going to recur in this rating?)