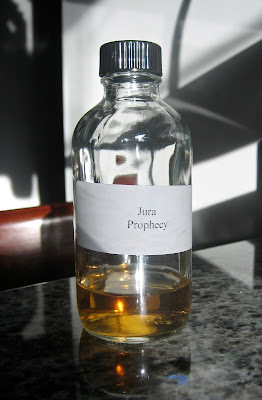 Tasting notes
Did you hear the news?  A well-respected science journal is soon to publish an article that establishes empirical support for extrasensory perception.  What?  You knew it weeks ago?  Riiiight.  Well, did you know that even unsorted subjects did better than chance in determining which of two veiled computers had an image on it—but only when the image was erotic?  Imagine what would happen if they selected out subjects with demonstrated ability in foretelling the future or seeing images through curtains.  And imagine further that the researchers poured out generous measures of the Jura Prophecy before sitting them down in front of the veiled computers.  I predict that they would quickly describe a remarkable tableau:

old steel string guitars played by men wearing tangerine aprons and apricot mittens.  At the end of their set break they put out their cigars into slices of bundt-shaped ambrosia cake.  No Virginia Slims for these strange musicians.  On the contrary, their cigars enfold raw Uzbek tobacco with the ragged texture of particle board shattered after a fall from a getaway van.  Finally, one of them leans a dark chocolate cello onto Uncle Clifford’s manky Wellies.  You do remember Clifford?  Somehow, I thought you would.

–On the scale of not yet empirically verified methods of divination–
The Jura Prophecy is divination by cheese–There’s no hint of entrails, as in haruspication.  And none of the disrepute that attaches itself to scatomancy.  Behold the power of cheese.

–Our thanks to Lyz Nardo and our friends at Jura for the sample.  Slàinte and Happy New Year!