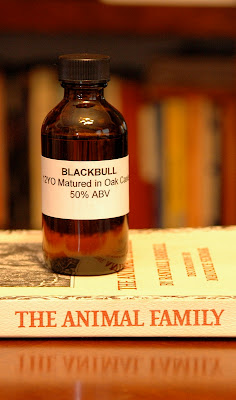 Tasting notes
This 12 year-old blend bottled at 50% abv offers a delightful nose reminiscent of fruit cake baking in the oven (this last qualifier we include for our American readers, in order to distinguish the sensation here from that associated with the inert and inedible bricks Americans call “fruit cake”).  But this is no ordinary fruit cake:  this one is heavily laced with Bacardi 151 (this we also include for our American readers, who, unlike their British counterparts, wouldn’t necessarily assume that a holiday cake would be drenched in hard alcohol) and is wrapped terrine-style in bacon (this we include for our British readers, who eat their fair share of pork products, but who have a long way to go before they could even consider the puerile depths to which Americans are all too willing to descend in the name of Almighty Bacon).

In the mouth, there is, oddly enough, no hint of bull whatsoever.  At most, one can detect faint notes of the fine meal the matador has after a day in the bullring.
After that, this dram skips the back of the throat altogether and goes straight to the sternum.  In many ways, the Black Bull 12 year-old is a quantum whisky:  it goes, leaving no spectrum, like the Higgs particle.  OK, so perhaps it leaves some spectrum, or at least, like the Higgs boson, there is some indication of its presence:  a little smoke, a little peat, black strap molasses and a tendency to induce a harmonious enstasy.  And lest you be put off by the elusive character this simile implies, don’t be deterred:  the Higgs particle is commonly known as “the God particle”, after all.

Rating:
–On the scale of cartoon characters with “bull” in their names—
The Black Bull 12 is Ferdinand the Bull–It’s not the first one that comes to mind (for most of us, that’d be Bullwinkle), but that doesn’t mean it shouldn’t be.  Stop and smell the flowers.

–Our thanks to Andrew Shand and Preiss Imports for this sample!  Slàinte!