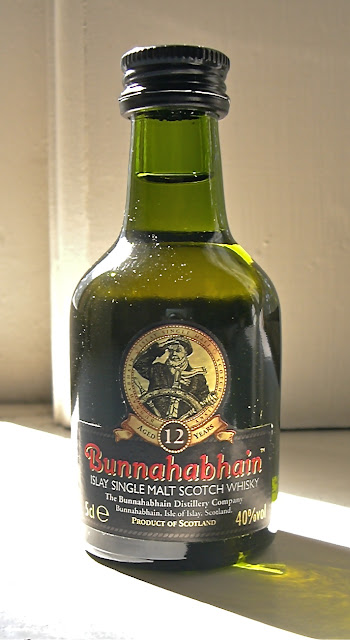 Tasting notes
Don’t let the mariner on the label fool you:  this expression is Bunnahabhain’s tribute to the Scots Pine, or perhaps to the medicinal qualities of its xylem (but definitely not of its phloem—that would just be nasty).  On the nose, dominant notes of Pinus sylvestris, Pine Sol, and, for some, the olfactory memory of a particularly bad moment of acid reflux.  Give it a minute to open up, and it fills the nostrils like pine resin nose plugs dipped in vanilla.  On the mouth, it begins quite nicely, with a classic one-two punch of flavors:  astringent followed by children’s cold medicine.  At this beginning stage, the Bunnahabhain 12 is a veritable speculum for the taste buds.  Now fully awake and on the job, taste buds pick up hints of fermented molasses and an overly herbed salad dressing (not together, though—that would just be nasty).  Cruising down the gullet, toward the finish, one recalls the youthful fun of sucking an olive oil and peat slurry through a hollowed-out pine branch (all of you did that, too, right?  right?).  The finish generates a cloying sensation not unlike a hamster eating peanut butter, and leaves you with a medicinal, but not palliative, sensation.  This dram could be accurately described at once as a paean to the medicinal and as a medicine itself (which, you have to admit, is just meta-nasty—and here I’m using the positive sense of the term, as in devilishly clever or something akin to “wicked good”):  one could easily believe that researchers at Bunnahabhain University developed this expression as a cure for neurasthenia.  In other words, just as it does with taste buds, it tells you in no uncertain terms to get your ass out of bed.


Rating:
On the scale of rough ways to wake up in the morning—
The Bunnahabhain 12 is your spouse’s smacking an insect as it crawls across your forehead—stinging and bracing, but once you are able to get your wits about you again, you’re very likely to be thankful.