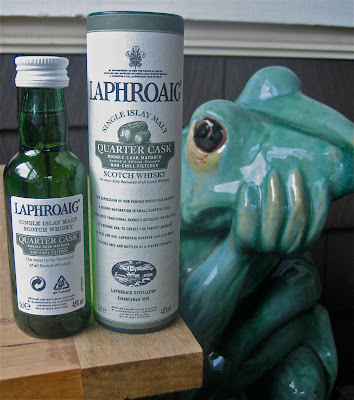 This one goes out to our good friend Ricardo…

Tasting notes:
Nosing the Laphroaig Quarter Cask is about the same as downing wasabi-less, nori-wrapped bacon sushi that’s been dipped in liquid smoke, or, if you are opposed to fusion food, kind of like wearing charred bacon noseplugs in a vain attempt to protect your sinuses as you scuba dive a coral reef in the Caribbean.  Or, if you choose to forego the noseplugs, it would work well to cauterize the sinuses as they hemorrhage an intoxicating mix of blood and raw heather.  If your tongue is adroit enough to evade the trident of the Shiva of Scotch, Destroyer of Palates, then you’ll note that after you’re done licking the tatami mat, it’s time to start in nibbling on a saki-drenched 250 year-old Hinoki Cypress bonsai tree while Sensei has his back turned.  Move on to the pulled-pork particle-board burritos wrapped in birch bark, then finish your walk through the Epcot Center of the senses by having your throat gripped by the Boston Strangler as if he actually happened to be a shiatsu masseuse.  Adding water to this delight allows it to open like Aristotle’s Lantern in the stomach of a street urchin. This dram makes it clear that there’s always a need for emergency dill pickles!


Rating:
–On the scale of crossword puzzle constructors–
The Laphroaig Quarter Cask is Brendan Emmett Quigley–His puzzles are witty, exuberant, break the rules, yet are still steeped in tradition, and like the Quarter Casky, they serve as a bracing tonic for the spirit when life isn’t as orderly as desired.  He’s virtually in the area, he won’t admit an adit; he says “ptui” to an etui, “no” to an anoa, and he eschews the olio of arias, oleos, et al’s, and oreos, et al. that are leaned on by other puzzlemakers. Besides, one word out of three for both this malt expression and for his name each start with a “Q.”

*–thanks again to our good friends at Loch Fyne Whiskies