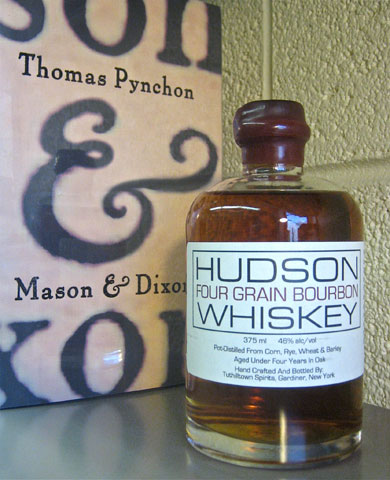 Tasting notes, this time in the form of a short short story (bear with me, the flavor profile is in there):

Emmett Korn, a taciturn man still years away from middle age, surveyed his farm from the porch of the house.  Despite his roots in Germany, Korn was born and bred in the fields of upstate New York and had left the land of his birth just once, and that was to find a wife.  His search had led him to Kentucky, where he had met and courted his young wife, Barlee McCoy, the daughter of two Scottish immigrants.  In the three years that followed, they had added two lovely children to the mix:  first a daughter, Rye, who surprised everyone with her sharpness and her tendency to bite; and then came a son, Weet, a spry boy who quickly became an indispensable part of everyday life on the farm, even though he chafed at having to do his chores.

Korn dug his pipe out of his coat pocket and looked around for his tobacco.  He found it where he’d left it, the package open and sitting out next to his rocking chair.  Even though it was a little dried out, its savoriness and complexity sang as his lighter circled the bowl to light the pipe.  Burn, burn, you little burning ring of fire, he thought, presaging the Johnny Cash song by some ninety-eight years.

After a time, he went back inside and was met with an overpowering aroma, like having fallen face-down in a recently fertilized herb garden.  The flavors in the air were the product of Barlee’s having thought, earlier in the day, when she had started cooking, Parsley, sage, rosemary, and thyme—presaging the Simon and Garfunkel song by over a hundred years, or perhaps just recalling a distant family memory of the ballad upon which that song would be based.

Korn sat at the kitchen table and pulled off his boots.  He was struck by the smoothness of the leather.  I could be a drill instructor with boots like these, he thought, presaging the surprisingly long and varied career for R. Lee Ermey, without being at all aware of doing so.

“Do you have to do that at the table?” Barlee asked, extracting the roasting pan from the oven and placing it on the table, which was already set for dinner.

“No barbeque tonight?” he replied with a whine.

“No, it’s pork tenderloin in a ginger-thyme reduction.”

“Smells wonderful.  Yeah, barbeque would have been all wrong.”

“What were you doing just now out on the porch?” Barlee asked, in an attempt to make sure their short conversation continued along its decidedly non-linear path.

“I had thoughts of plotting world domination, but, for some reason, that seemed like it would have been all wrong, too.  Seemed much more fitting to ponder how I might settle the score with those damn Hatfields down the road.”

“I appreciate your giving that so much of your energy, dear.  It seems like my family’s been fighting with them forever.”

“Of course, dear.  I just wish I could figure out why they moved all the way up here.  Are they seriously that committed to fighting this thing out to the bitter end?” he asked, unknowingly presaging another interstate war by only a few years.


Rating:
–On the scale of debut novels—
The Hudson Four Grain Bourbon Whiskey is Jonathan Safran Foer’s Everything is Illuminated (didn’t think I would actually go with V., did you?)—edgy and innovative, this one features multiple narrators who couldn’t be more different but somehow work really well together.  It ranges from laugh-out-loud funny to tragically sad without being twee.  Even though it has some rough edges, it’s stunning, especially for one so young.