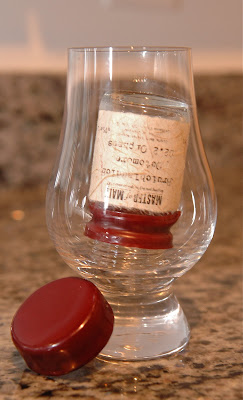 Tasting notes:
Stephen pouring out our measures of the Octomore Orpheus triggered in me a false memory of being stuck in a blazing car, so powerful is the smokiness in this dram.  But I was restored to my faculties by Anthony Hopkins speaking to me as though I were a little girl the sound of Bill preemptively pulling the battery from the overhead fire alarm, and we got down to business.  There’s not much about the sight of the Octomore that prepares you for the surge of elemental forces that awaits you.  Nosing it, one is as careful as you would be when peering down an Erlenmeyer flask filled with acetic acid.  This is decidedly not a whisky to be trifled with, I note ruefully, regretting the purchase of porcelain veneers that that social-climbing dentist talked me into and which are now ruined in the firebath formerly known as my mouth.  Hot like Octopussy and powerful like Doc Ock, yes; but what is surprising is how it is more life-giving than even the Octomom.  For underneath the smoke it is vegetal through and through.  There is at least one serving of vegetables in every dram (“I coulda had a V-Octomore!” I think, smacking my forehead with my palm).  Real vegetables, not Reagan vegetables.  Think haggis made from Tolland Man’s stomach, replete with his last meal, a porridge of barley, linseed, gold of pleasure, knotweed, bristlegrass, and chamomile.  Serve it in an earthenware bowl with thick strips of Squeez Bacon® fanned out like a popsicle stick trivet, and with side three of Stevie Wonder’s under-appreciated Journey Through “The Secret Life of Plants” ringing out in an empty apartment.

–On the scale of vegetarian Southern rock drummers–
The Bruichladdich Octomore 02.2 Orpheus is Artimus Pyle of Lynyrd Skynyrd–Seen on the eerily prescient cover of “Street Survivors” proudly proclaiming his pythagoreanism, the Octomore knows a thing or two about boldness (check out the athletic socks and cutoff jean shorts!) and not giving a damn.