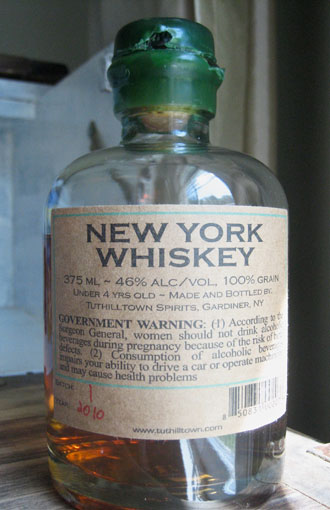 Tasting notes:
At 92 proof, the Tuthilltown Distillery’s New York Whiskey is as assertive as Mike Tyson in an elevator and as subtle as a boa constrictor coiled around your leg. The nose is medicinal, but in an interesting way, like a native elixir administered by a shaman of the Lenni Lenape tribe to a European fur trader ridden with the ague and the existential angst brought on by being thousands of miles from home.
A generous swig unleashed acidic thunderbolts like a summer storm, and the aromatic tornado swirled like the scent in a gated community of a fresh mown lawn bespeckled with clover, dandelions, and milkweed. It made my mouth very, very happy indeed. As time went on, there comes a mounting taste like a sunflower seed sucked straight out of the florets arrayed in a beautiful logarithmic spiral.
The long mellowing finish is like dipping an esophagus in an old lady perfume found in the back pages of the Vermont Country Store catalog. It fades like a supernova diminishing over a few day span, leaving darkness where formerly there was light. It resonates like Frank Sinatra crooning “French Foreign Legion” while you try to remember the name of the shockingly attractive person sitting across the table, face framed in cigarette smoke, eyes sparkling in candle-light, warm calf pressed against yours.

–On the scale of poetic tropes–
The Tuthilltown New York Whiskey is the simile–which is like a metaphor or an analogy. You could communicate without a simile, but that would be like using American Sign Language in an unlit cave, or like sending Morse code signals using only a dit and no dahs. And that would suck like being beyond the event horizon of a black hole.