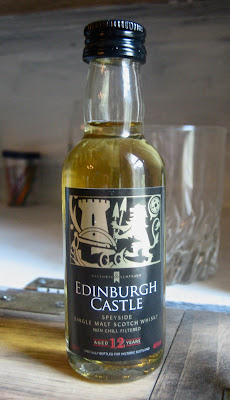 Tasting notes:
Named after the imposing stronghold overlooking the Royal Mile, this dram turns out to be much more accessible, at least to a merely pedestrian reviewer like myself, than the former regal residence was before it became a tourist attraction.  The nose recalls the inside of an old steamer trunk transporting cinnamon and lavender honey to the King (even though that would have occurred, rather anachronistically, prior to the invention of steam power).  On the mouth, the honey turns to molasses, then mellows to caramel, then to peanut brittle, and finally to anadama french toast with maple syrup.  And that last development prompts another comparison:  this dram is as nicely balanced as a great diner breakfast.  (Of course, the last King of Scotland pre-dates modern diners by at least a couple of centuries–and it’s hard to imagine his Highness would tolerate another such post-dated fact in his court.  Another anachronism and someone will lose his head.)   And as if that weren’t good enough, then comes a layer of phenolic smoke, much like iodine evaporating from a cauterized wound:  imagine Darth and Luke meeting, but instead of fighting, they’re just horsing around, and instead of viciously cutting off Luke’s arm, Darth accidentally lops it off, and instead of all the paternal issues and the gnashing of Luke-teeth, Darth helps Luke up and treats the wound with some iodine, and then the two of them go out for some pancakes and country-fried steak. (Hey wait!  I’m not finished yet!  Don’t you want to know how it tastes with a little water added?  AAAAGGGGHHH!!!)

–On the scale of famous beheadings–
The Edinburgh Castle Speyside 12 is Maximillien Robespierre–couldn’t have happened to a more deserving guy, and after his horrifically botched suicide attempt just hours before, it turned out to be quite the merciful act.  In other words, all sorts of positive outcomes here, including eventually ending up in the Catacombs, which are just cool.