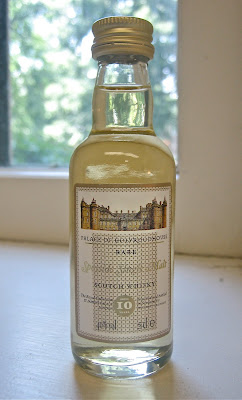 Tasting notes:
As Shandy is to beer, so this expression is to scotch whisky.  That is to say, it is a whisky for those who don’t like whisky, or a whisky with its essence replaced with something entirely different.  This remarkable bit of alchemy, however, turns a precious metal into something base.  At first, one leans forward to focus on the scent of maple syrup in a stale bowl of cheerios.  But like the table awaiting a B&B guest who stays so long in the first B that she misses the second, there’s not much on offer here.  Indeed the taste disappears as completely as Nixon’s on-tape admission to Haldeman that he had a foot fetish…and had ordered the Watergate break-in.  What is more, this nonwhisky is disappeared so thoroughly one swears that it never existed in the first place.  Accordingly, I propose that the Palace of Holyroodhouse 10 be made the official Speyside scotch whisky of Oakland, California.  There is no there there.

–On the scale of the three Christs of Ypsilanti—
The Palace of Holyroodhouse 10 is Leon–Though Joseph and Clyde each remained resolutely convinced of their divinity in spite of the presence of two others claiming to be the Savior, Leon eventually retreated, asking to be called “Dr Righteous Idealed Dung” and claiming later that his wife was God.