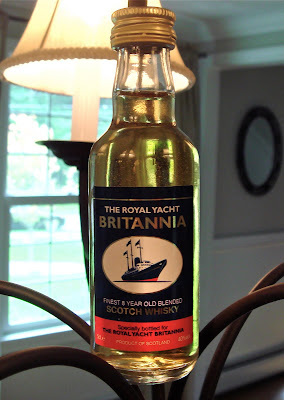 Tasting notes:
A recent study whose particulars I lack (blah blah, Journal of Psychology of Addictive Behaviors) suggests that prayer and drinking are inversely correlated; that is, the more one prays, the less one drinks, and the more one drinks, the less one prays.  Now one may debate the merits and wider meanings of a statistical study run by social scientists, but rather than explore that fruitful avenue inquiry, I instead unearth an easy paradox.
I pray, nay, beseech higher powers for good, nay, great whisky expressions to fall manna-like from heaven into my Glencairn snifter.  With gratifying regularity, due to the kind offices of Stephen’s father and John’s brother-in-law—and the manufacturers with the wisdom to create airplane nip bottles—my prayers are answered.  Hence, the more I pray, it seems, the more I drink.  A refutation?  No, simply a self-referential paradox. (But a disturbing one.)
The Brittania Blended 8 year old is NOT the answer to anyone’s prayers.  I’ve often wondered how Stephen and John feel when the snarktastic task of writing up a non-starter falls to them. Well, now I have a clue.  It’s not exactly clear to me what Brittania blended—legally, whiskies of at least 8 years of age, I suppose—but the nose hints rather at a poorly-tanned snakeskin belt wrapped around a cedar log with a rabid, near-zombiesque armadillo supine on top.  A second sniff instead unfortunately invites a gobsmacking by a phenolic porcupine surmounted by a wasabi-dabbed sea urchin.  All tossed into a blender.
In the mouth, a soon-to-be-sunk Lusitania, spewing diesel smoke, with an impossibly anachronistic pair of fowl; a dodo and a passenger pigeon, both perched upon the poop-deck rail. (Or was it the orlop?)  Maybe a malodorous mound of mouldering monkey mucous with a mange-ridden mouse micturating on top, decaying like J. Lo’s career?  All thrown into a Cuisinart.
The finish impresses, much as eating a lit cigar from the clipped end would impress, especially if a stink bug and a tomato horned caterpillar were held on top of the cigar by mucilage or worse, gutta-percha.  Which is to say, it is impressive(ly awful).  All tossed into a vat of prussic acid.

–On the scale of movies spoiled by sadistic or thoughtless critics–
The Britannia Blended 8 …***SPOILER ALERT***…is certainly worse than the disappointment suffered over The Crying Game (“Everyone should know by now that she’s really a man”); worse even than the ruination of The Sixth Sense (“Bruce Willis is dead, too”). No, the Brittania Blended 8 year old is no less than the awfulness of learning from smug critics that in The Empire Strikes Back, it is revealed that Darth Vader is Luke Skywalker’s father. (“It comes as a shock to the viewer to learn…”)  In other words, pure unmitigated suckitude, with a sour bucket of fermenting moldy orange peels on top.  All reduced to a paste of sheer awfulness by a bacteria-infested mortar and pestle.