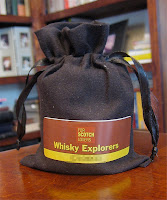 Tasting notes:
Mystery Dram #2 from the Whisky Explorers Club opens with a cognac-y smell invested with the cornful of a Kentucky bourbon–fortunately not a Louis Bourbon. (“Cornful?” quoth the other Impostors, scornful.) Fire in the Belly is not just a cliché used to denote manliness, it’s a torture worthy of the 3rd circle of hell, or, after a moment, a delightful way to pretend that hypothermia is not setting in. Loads of color, and a taste that never grew beyond its Terrible Twos (although it turned out to be aged 6-8 years). Rough and rusted, a saw blade that nevertheless plays beautiful music. A Pentecostal dram, because drinking it made me speak in tongues. Mystery Dram #2 is the virgin thrown into the volcano; the volcano may be placated, but the virgin? not so much: Booker’s Bourbon! 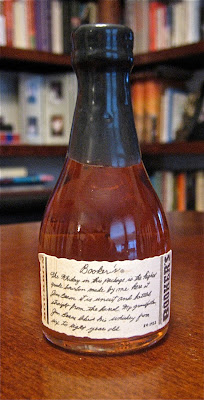 –On the scale of Talking Heads albums–
The Booker’s Bourbon isn’t Speaking in Tongues—that’d be too easy.  It’s Stop Making Sense, because a glass or two of it, you’ll be singing “Psycho Killer” while dancing in an oddly-fitting suit and jacket.  Hopefully not a straitjacket, unless you’re Houdini.
–Bill