Recently, the three of us embarked on our first official distillery tour as Malt Impostors to the acclaimed Tuthilltown Distillery.  We arrived just days after Tuthilltown had agreed to affiliate with W. Grant & Sons on distribution of their Hudson Whiskey line and, and as chance was shining brighter on us than a supernova viewed through a snifter of Glenfiddich, we happened to show up as Mr. Charles Gordon, great-grandson of Mr. William Grant himself, was leaving, and Gable Erenzo of Tuthilltown was kind enough to introduce us.  After that frankly dumbfounding and dumbstriking beginning, our visit got better and better, as improbable as that might seem, thanks entirely to Gable’s generosity of spirit and spirits.
Tuthilltown is a small, innovative distillery that utilizes mostly local crops to produce varietal libations: two different kinds of bourbon, rye whiskey, single malt barley whiskey, rum, two kinds of vodka made from apples plucked from trees down the road, and for those who fancy pretending that it’s still Prohibition, a smooth-drinking “white dog” corn whiskey.  A significant proportion of the spirits they produce is aged in very small (2, 3, and 5 gallon) charred new oak barrels, imparting massive flavor and color to their expressions in a relatively short period of time. 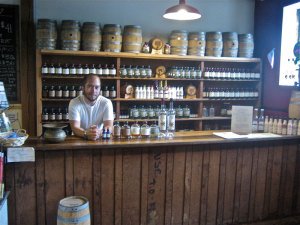 We highly recommend both the tour and tasting room at Tuthilltown.  The stills are impressive, and the tasting room features etched Hudson Glencairn glasses (you get one free with the tour) and a special “system” for introducing the tiniest bit of water to certain expressions to ensure that they open up properly.  Below please find a preliminary review to wet your whistle for the tasting notes of Tuthilltown products that will follow over the next several days.

The Hudson Whiskey Tuthilltown 1fl.oz. micro-mini “eyedropper”
By far the best value in the redoubtable Hudson Whiskey lineup can be found in the arresting cobalt blue bottle nestled, appropriately, in the center of the stocking shelves.  Presumably the small size of the bottle prevents the makers from applying a label large enough to contain a fuller description of the spirit inside and its attributes, but we were delighted by the challenge this put to us and immediately
set to work.  Remarkably, the nose blended seamlessly with the happy aromas in the tasting room.  It was as if the twice- and thrice-distilled apple vodkas and various whiskeys contributed their quintessence to this exciting dram, like wise men bowed in prayer before a newborn king.  The clarity and lightness of this mysterious spirit is unmatched by anything we have ever tried.  To call it light-bodied is, in fact, to weigh it down.  After all, what need has such an angelic fluid for such leaden description as provided by mere words?  No, I can only conclude that this ambrosial delight is meant for a Tuthilltown Emperor, resplendent in his new robes knitted from leprechaun beards, rolling in a unicorn-drawn carriage on a forking rainbow path.
At only $1.99, be sure to stock up!

For a different look at Gable and his father, check out this video.