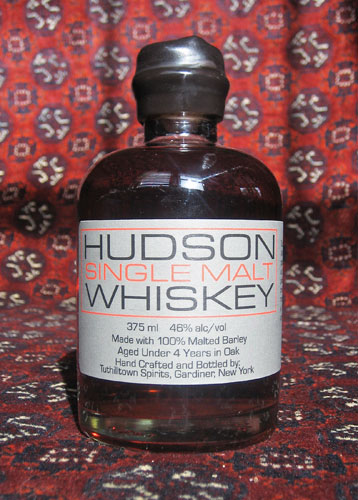 Tasting notes:
This single malt whiskey, made from 100% barley malt, packs a potent 1-2 punch to the proboscis, punctuating plum perfume with earthy undertones followed by herbaceously floral (or maybe “florally herbaceous”…no, it’s definitely “herbaceously floral”) tendrils that climb into the front of your brain and signal that this is definitely not your father’s single malt…and it’s certainly not the “morning courage” your father buys in 1.5 liter plastic bottles and hides under the kitchen sink behind the scouring pads and the Krud Kutter.  On the tongue, one realizes that the hints of clover on the nose constitute nothing more than a head fake, since the sticky sweetness in the mouth is darker and deeper than mere honey:  it’s sweet sassy molassey.  There is no seaweed here, no brine, no peat–this dram is wholly land-locked.  Nonetheless, it offers a satisfying warmth and brings the iodine, the two together recalling a high school nurse’s office.  The finish is uncomplicated, but long and fiery, much like a kids’ luge ride down a lava tube.  But as it wanes, one tastes something older, something more complex, like titrated amber on the back of the throat, only without the bugs.  Were Tuthilltown able to sell this expression for only $20 a bottle, this reviewer would wear a bandolier full of them at all times—and would doubtless make countless new friends whenever he went out.  At the more typical $40-$50, however, this reviewer is much more likely to enjoy it in a manner befitting a fine single malt:  seated alone in a leather chair in his Meerschaum pipe library, reading an Umberto Eco novel with his feet up on his “servant ottoman.”

–On the scale of great independent films–
The Hudson Single Malt Whiskey is Mean Streets–early Scorcese, with a lot of fire and personality and love evident in every frame.  It’s still a little rough, but portends the amazing things yet to come.  It’s no Taxi Driver, but it’s a film that shows the director is ready for the big time (and wider distribution) that lies just ahead.