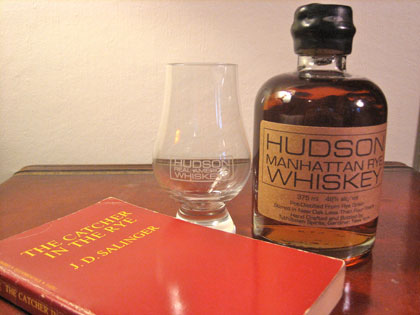 Tasting notes:
It’s awfully tempting for this reviewer to make Catcher in the Rye jokes about this lovely expression, but I’m Holden back on it `til later. Maybe when I finally receive my J. D. and am able to practice law? Anyways, itsa great whiskey and I sure like to let itsa-linger on my tongue.
In all honesty, I took to the Manhattan Rye with some trepidation. My main experience with rye was pilfering from the bottles I was able to dilute at friends’ houses when I was still a lad under the legal drinking age. Not to cast aspersions on the taste or social strata of my friends’ parents, but the memories were not encouraging. In all fairness, my palate wasn’t well developed then, either, as I mainly aspired to a dinner consisting of a half-pound of bacon.
The wholesome nose is akin to the requisite sweet smell wafting from the corpse of a saint, or perhaps on a more quotidian level, like burying your face in your grandmother’s sherry-splattered, starched, line-dried apron, while she’s in the kitchen making chicken marsala and olallieberry pie for Sunday dinner.  In the mouth, improbable licorice brownies, lacing the air with tons of cocoa and anise-tons; maybe hot, crossed buns? A touch acidic, but that’s a just a jolly red on litmus paper. Ho ho ho.  The 92 proof burn fades to a pleasant afterglow, settling over the palate like an encompassing eructation at the end of a dinner party after a fine meal prepared by David Chang at momofuku.

–On the scale of frisky three year-olds–
The Hudson Manhattan Rye Whiskey is Alydar–Goddamn if he couldn’t beat Affirmed when it mattered most, but he placed second to Affirmed in all three of the Triple Crown races in 1978.  Although 11 horses have won the Triple Crown, Alydar’s Triple Sec(ond) is a feat never seen before or since.  Oh, and who was the jokey [sic] Holden the reins for Affirmed?  Stephen Caulfield.  Er, I mean, the jockey was Steve Cauthen.