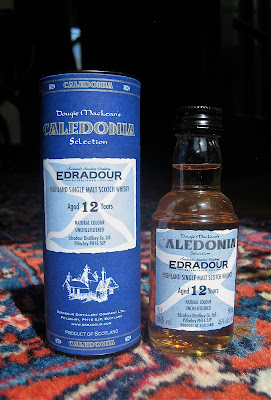 Tasting notes:
Dame Joan Sutherland was given the Order of Merit.  Charles Aznavour was esteemed National Hero of Armenia.  Sir Paul McCartney has an asteroid named in his honor.  And arabesque master Orhan Gencebay has been called Turkey’s Elvis.  However, none of them has enjoyed the privilege bestowed on Scotland’s national treasure, Dougie MacLean.  He is the only musician to have a hand in creating a whisky with the same name of his first album.  “Dougie MacLean’s Caledonia” produced at the Edradour Distillery is as smooth, graceful, and light as his justly praised music.  Smoothness like scalloped butter balls softening on a bread plate left untouched by a bride.  Gracefulness like the bride thanking the groom’s cousins (at tables 18 and 19) who look away, craning their heads to see the food being served.  Lightness like the wisps, more steam than smoke, encircling the tines of the long-handled biscuit prick easing a popover out of a cast iron pan.  This is a scotch fit for drinking in a glass elevator rising up slowly in a hotel lobby.  You look out at the rainforest of fake plastic trees, muzak playing inconspicuously until—your mind lurches to recognize a pattern.  And for a moment there is nothing and everything in the mind at once.  And then the pattern is established; the mind stills itself, drawing its concentration on the beautiful notes in perfect counterpoint with the whisky.

–On the scale of devices that make things easier and augments enjoyment–
The Edradour Dougie MacLean Caledonia is the capo–It’s much closer to the telescoping pocket back scratcher than it is to Pop-Tarts, and that’s high praise indeed.