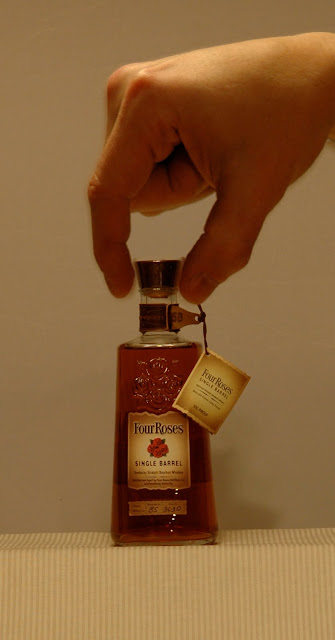 Tasting notes:
Since this is my first review for The Corn Impostor, it makes sense that it’s also the first set of tasting notes I write while suffering the pangs of a hangover induced by the expression under the microscope (which is not meant to suggest overly much about my high school drinking proclivities).
The nose teases with a scent of scotch or butter scotch or margarine scotch. More corny notes emerge over time, like a Henny Youngman routine, or like the undertones arising from using Mazola oil in lieu of butter in a brownie recipe. (How long does it take for for aspirin to kick in?)
The mouthfeel is like a vajazzling applied by accident to a tongue: It’s sparkly, suggestive, upscale, and smacks of delightful crunchy sinful behavior. A surprising tannic-drenched leathery flavor girdles it like a spiky studded dog collar on a toy poodle. (Stephen, not a rocket scientist, likened the ‘leather’ to a money belt kept under a mattress by an 87 year-old widower who distrusts new-fangled technologies. Not quite the leather I’m getting, Stephen.)
The finish murmurs ‘Scotch” like a deranged, be-wigged, besotted member of the British House of Lords who’s inhaled too much wasp-killer whilst tending his prize tulips or award-winning pig. It’s also palpably cleansing, like a good schvitz in a Russian steam bath. (How much aspirin is safe to take? I mean, seriously.)
This is an eminently drinkable potation concocted from King Corn, and as this correspondent has discovered, it’s almost too drinkable, given that it kicks like a combination of an Army mule, Jet Li, the Rockettes, and Alex and his droogs in A Clockwork Orange. (As I will testify.)

Rating:
–On the scale of risings from the dead–
The Four Roses Single Barrel is significantly better than a zombie army or even the second act of Britney Spears’ career. I can’t bring myself to see it as a religious experience, either, so now that I’ve identified endpoints to the spectrum, I’ll just say that it’s mythical and mystical: The Four Roses Single Barrel is the Phoenix, rising from the ashes (of a burnt-out oak cask).