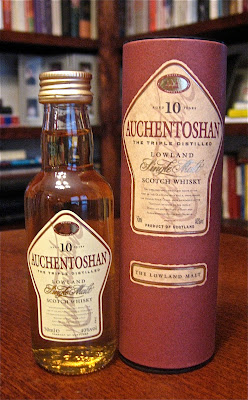 Tasting notes:
On the nose, mackerel served on a sherry-soaked cedar plank; on the mouth, the sensation of being locked in a leather valise with shavings from a hamster cage mixed with those from a full wheel of Pecorino Romano; and the finish is long and complex, not unlike serving as a South Sea kelp-soaked swab on the tea deck of a British frigate.  The marketing information on the canister of the Auchentoshan 10 reports, among other things, that this dram is “accessible.”  As you can see just from the notes opening this review, we here at the Malt Impostor couldn’t disagree more.  There’s so much complexity here, buried under layers of inscrutability, the Auchentoshan 10 turns out to be about as accessible as a 10 year-old Dalai Lama, a 10 year-old Fort Knox, or a 10 year-old’s logic.  In fact, if the Auchentoshan 10 is accessible, then I’m the Queen of Sheba–and though I may be a queen, I’d certainly never be a queen of the likes of ewes.

I apologize, but I really must stop here before the rating and admire that incredibly well-crafted pun.  No really–go back and read it again.  Now admit it: that is by far the best multi-layered pun you’ve ever experienced.  And notice the lengths to which I was willing to go for it:  on my most interesting days, I don’t think anyone would ever call me a “queen” (diva, maybe, but not queen).  But that tells you just how committed I was to that pun–and that level of commitment is representative of the devotion we here at the Malt Impostor have for our craft.

Rating:
–On the scale of things that are hard to pin down or categorize–
The Auchentoshan 10 is the recent music of Tom Waits–neither smooth nor asperous, neither desultory nor disciplined, neither particularly profane nor profound, but nonetheless worthy of reverence, even if, while you’re experiencing it, you can’t say exactly why.