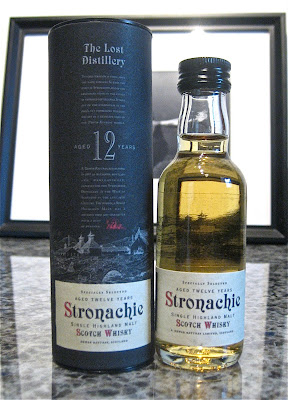 Tasting notes:
Stronachie… Stronachie….  Where have I heard of this?  Is it the name of a minor character in Verdi’s Un giorno di regno?  Pasta turned into the shape of the pancreas?  Clerical vestments? Martini & Rossi Asti Stronacci?  An insult in Na’vi more politely translated as “ikran cloaca”?  It is none of these, but perhaps I can be pardoned for my poor memory as it in fact refers to a lost distillery near Forgandenny.  After a 70-year interregnum, production began again in 2002 with the attempt to match the properties of a rare 1904 bottling.  If they have even approximated the archetype, the result is remarkable.  Drips from a sponge soaked in confectioner’s sugar and Bay Rum aftershave.  Rich, charcoaly, even gamey; it recalls nothing if not the steam from a venison, zucchini, and fingerling potato foil packet pulled from a Cub Scout campfire, with a dash of Jane’s Krazy Mixed-up Salt.  The Stronachie 12 elicits the same degree of mixed admiration for, and some of the curious tastes of, the handiwork of an imprisoned Poe aficionado, whose mint-toothpick homage to the House of Usher was burned by an aggrieved cellmate in a fit of pique.  (The latter, if you must know, held that The Tingler was the finest film adaptation of a Poe story, and after being dressed down on this point before a few members of Nuestra Familia—for clearly The Tingler is not fine, nor is it Poe’s–well, you can only imagine his shame.)

Rating:
–On the scale of names for an as-yet-to-be-created lesbian punk band formed by formal Classical Greek students–
The Stronachie 12 is “Rosie Fingered Dawn”–It somehow blends genuine respect for the authority of tradition with a subversive nod to current tastes.
–John