In January of 2009, the three of us went, at John’s behest, to the Last Hurrah Bar in the Parker-Omni Hotel in Boston.  The goal was to try several of the 1/2 ounce “samples” of the high-end single malt scotch whiskies they have on the menu there.  That first experience at the Last Hurrah gave rise to our launching the Malt Impostor site later that year.  To immortalize that blessed event, the three of us recently made our way back to the Last Hurrah to relive that state of naïve innocence that characterized our pre-MI existence and to try some very good whisky.  Before we went, Bill had alerted us to the fact that the Last Hurrah is now selling full drams–and full drams only, no “samples”–of The Last Drop, a truly singular whisky of some renown.  After arriving and taking “our” table, we discussed at some length sharing a full measure of the Last Drop.  Stephen argued strenuously for imbibing in the rare spirit, and finally convinced the others by putting his money where his mouth was and offering to pay for it himself.

What follows is the unfiltered, raw riffing we did as we tried the Last Drop and several other “samples” of other whiskies.  Think of it as a bootleg recording of a group of jazz greats playing their guts out in an impromptu jam session–only without the great music and without the talent.

The Last Drop (Last Hurrah Full Measure)
“Oh wow.”
“strong hints of cognac”
“This the inverse of the Milgram experiment.”
“cotton candy made from maple syrup”
“It’s not worth $130.”      –“But what is?”
“a microplane annihilating the roof of my mouth”
“Every breath I take is like the rat pressing the bar to stimulate its pleasure centers (until it dies).”

“The saddle on a triple crown winner ridden by Lady Godiva–not side saddle.”
“wood spirits, corinthian leather”
“It’s from a different galaxy, a long long time ago, in a Scotland far far away.” 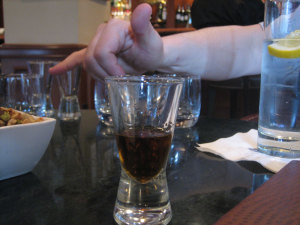 “How about the legs?  You can’t really call them legs, as they never stretch down into the bottom of the glass [and they never did].  Maybe we should think of them as vestigial limbs.  Or embrionic limb buds.  Or the bumps on an irradiated amphibian.”

The Oban 93 Distiller’s Edition (Last Hurrah 1/2 oz. sample)
“I don’t know what to say, but I’m not speechless this time, just high already.”
“This takes an already good thing and wraps it in flannel sheets on a brisk night.”
“pineapple liqueur, a slight hint of apricot liqueur”

The Ardbeg 10 (Last Hurrah 1/2 oz. sample)
“Condensation off a WWII era troop transport muffler”
“This is something gauze bandages are soaked in”
“paint thinner poured through a block of peat”
“phenolic phantasmagoria–alongside the famous Parker House rolls”
“the smell of a failed trepanning”
“the smell of a Civil War surgery floor”
“The water hits it and it’s like there’s oil in it–and it’s as if the water’s screaming, screaming to get out.”
“This is like drinking Laphroaig with everything good taken out of it.”
“nothing but heavy peat and fire”

The Bruichladdich 15
“This is making my tongue drool like Pavlov’s dogs.”
“The nose is nothing to write home about–at first I was disappointed:  the first half second on the tongue was nothing interesting, and suddenly, WHOA!! beautiful!–and it just keeps going and going and going…”
“This is a whisky that the bartender from The Shining would have served (even though it was bourbon he served to Jack).”
“faint dimension of spoiled butter” [on the nose, says Bill; on the mouth, says John and Stephen]
“It’s curdling.”

[and after all of that]
“I’m still exploring the halls of complexity of the Last Drop.”