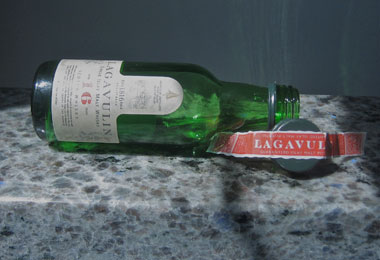 Tasting notes:
As one breathes in the aroma of the Lagavulin 16, one cannot help but picture an angel lounging on a cloud of smoke produced by the burning body of a saint.  The profile on the nose is so judicious and Apollonian (forgive the mixed religious metaphor), one can even detect evanescent hints of a fluoride treatment in a dentist’s office therein.  In the mouth, the Lagavulin 16 bursts forth with briny wildness, like Poseidon exhaling, with seaweed and seethings of eels scattering in the wake.  Betwixt sips, one ogles the glass and notices, with rather intense contentedness, that the legs on this one go all the way down to the floor.  Lest one be tempted to take these last couple of observations to be incongruous, the point is that the Lagavulin 16 is Apollonian on the nose, and Dionysian in the mouth.  The dichotomy, like the finish, resonates deep within the human soul and just feels like home.  And thus it becomes apparent:  in today’s world, our best hope for unifying these twin principles lies not in tragedy, but in Lagavulin.

Rating:
–On the scale of masterworks that destroy (at least) one career and launch (at least) another–
The Lagavulin 16 is Friedrich Nietzsche’s The Birth of Tragedy–Just edging out the Beatles’ White Album (and well ahead of the Black Album).  While the White Album has the distinction of launching four careers, The Birth of Tragedy destroyed a career and launched another career for the same person.  Plus, no matter how nihilistic or crazy Nietzsche got, he never came up with anything nearly as disturbing as “Revolution 9.”


2 Comments on The Lagavulin 16