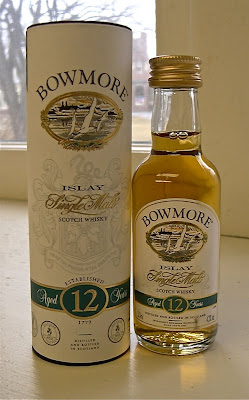 Tasting notes:*
Hits the nose like bacon frying in a cast iron skillet, which is to say:  the aroma that wafts out from the opening of the pearly gates as you leave purgatory. Seaweed limns the nose, like the chiaroscuro highlights of a Rembrandt painting, and makes way for the hot ceramic olfactory emissions of mesquite charcoal, slow-cooking pork ribs in a Weber grill. (Clearly, now you are in heaven.)  After the skeleton of the superb structure climbs into your nostrils, the delight of the mouth is like the feeling of sinking into the supple leather seat of your Ferrari as you smoothly accelerate out the cobblestone driveway of Nicolas Sarkozy’s chalet after an intimate soirée winds down (at least as best as I can imagine what that would feel like). Long finish like a curling stone being swept down the ice, and aftertastes sticking in the memory like Shaun White‘s nailing the Double McTwist 1260.

Rating:
–On the scale of infidelities to one’s spouse–
The Bowmore 12 is what happens to Mia Farrow in Rosemary’s Baby—It’s demonic, it’s procreative, it possesses you, there’s nothing you can do about it, and there’s no earthly reason to feel guilty. Sláinte!
–Bill


*–I’ve never met Stephen’s father, but it’s clear that his excellent taste in scotch is exceeded only by the silver tongue of his son, who talked his father out of such a wonderful dram.