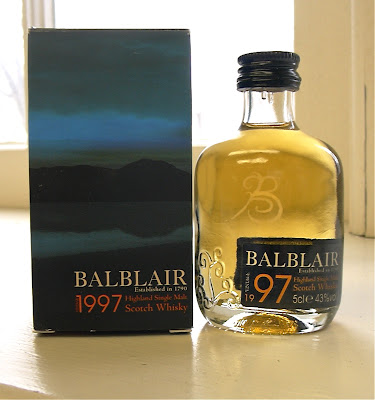 1. the condition in which a kilt-clad man standing cliff side may find himself when a breeze breaks in over the Firth of Forth.

2. any inadvertent male exposure, as when performing a groin-stretching exercise on the football pitch.

3. chiefly Scot. 1997.  A Highland single malt whisky aged ten years in oak barrels.  The nose is like smelling a lemon through a drier sheet.  Sweet and refreshing; well-balanced throughout; high, clean, and light—a good morning drink if there ever was one.  Scottish astronauts would have had this in place of Tang.  Draw several milliliters of Gran Marnier in a syringe, then trace the needle along the grooves on an old Pachisi board cleaned with Lemon Pledge while depressing the plunger, and finally retrace the grooves with a cocktail straw held in your lips.  What you taste may approximate the delights of the Balblair 1997-2007, though it is not likely to have the long-finishing subtlety that I can only liken to the heat of a winter bath, the warmth of well-being.

Rating:
–On the scale of school pranks–
The Balblair 1997 is the Hertz Doughnut–Less common than a wedgie, and subtler than noogie, this artful blend of verbal wit and unprovoked violence deserves wider acclaim.