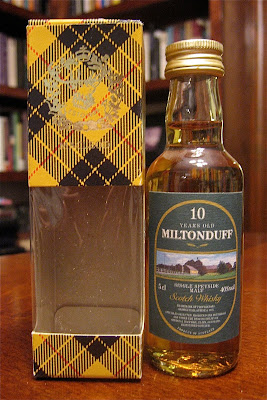 Tasting notes:
What’s in a name? A rose by any other name may still smell as sweet, but the Miltonduff by any other name wouldn’t conjure images of a poet’s keister as he sat squirming in a church pew, dreaming of the epic struggle between good and evil, eventually achieving enduring fame with Paradise Lost. Lambent, evanescent, and spicy: Perfumed–nay, censed, or crawling–with vanilla: A bottle of chardonnay gone missing from the warm climes of Napa Valley, crawling into a vat ensconced in Speyside? Swirling the malt, and holding the crystal goblet up to the light reveals legs; long, long, long legs as if a young Daryl Hannah were to be uncloaked as a sixteen-limbed spider prone to frequent whisky glasses. Disturbing? In the eye of the beholder.
On the tongue, there is peat without smoke, which is certainly less lethal, if less interesting, than fire without smoke. One might indeed characterize the Miltonduff as Clay Aiken; a non-threatening entertainment option (admittedly, also in the eye of the beholder) that you’d trust with your 10 year old daughter. Pine in the sun, leather cleanser, but not as earthy as Moises Alou’s or Jorge Posada’s urine drenched mitts. Nice and round, like a baseball, or any other orb, for that matter; soft, fuzzy, and cooing like a tribble. Finishing with notes of maple syrup and exhaust fumes, as it runs out of gas.

Rating:
–On the scale of increasingly surreal interviews—
The Miltonduff 10 is NBC’s milking and milking Lindsey Vonn after her gold medal run in the Women’s Downhill–The first question struck pure gold:  Vonn weeping, saying she gave up everything for this, and finally achieved it.  Then, seeming to surprise her, more questions, and when the interviewer couldn’t dredge up a gram of lead slag or even a dollop of garden manure, what did NBC do?  Send in her husband, wired for sound like he was an FBI informer, telling her over and over that she did good.  Wow, that was some seriously awful stuff.