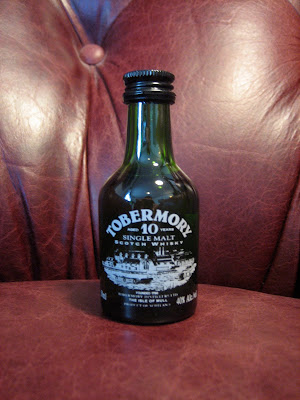 Tasting notes:
The Tobermory 10 begins with a flash of honey or syrup, a brief delight like that of the detached spectacle of musket fire before the realization that you are its target–and that you never had the chance to have children…or sex, for that matter.  And so the initial taste of sweetness quickly gives way to an infelicitous experience.  A cresting wave of bitterness, as when wracked with chest pains you search for a glass of water to convince an extravagance of baby aspirin into your stomach.  And the bitterness remains, like a pinch of week’s-old, chalk-tray dust, the residue of a failed equation wiped away in angry strokes.  And still the bitterness remains: a dozen Ticonderoga number-two pencils ground in a lava-rock mortar, the dusty pile of which is poured gently into a hollowed-out apple as part of an imagined gift to a hated teacher you haven’t the courage to confront otherwise.  Gratefully, water brings a reminder of the initial sweetness though now, chastened, you can recognize its nature—acesulfame perhaps, but more like a synthetic fructooliosaccharide.  For all of this, however, the finish is not terrible.  In fact it enrobes the tongue in the consoling taste of the currency of a former Eastern bloc nation held in a street vendor’s pocket.

Rating:
–On the scale of metal band names with gratuitous umlauts–
The Tobermory 10 is Assück—With a drummer named Rob Proctor, it is so thoroughly what it is that no diacritical mark is necessary.