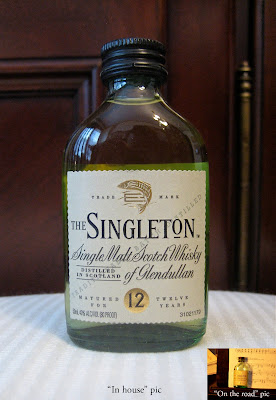 Tasting notes:
I have always been impressed with the thoughtfulness and thoroughness that some of the master whisky bloggers, such as Dr. Whisky, John Hansell, and Karen Taylor and Matt Chambers, spend on tasting and retasting expressions before hazarding a write-up. Here at The Malt Impostor, we rarely have the opportunity (or inclination) to hit a nip multiple times in the service of giving a balanced review. It is thus a fair question to wonder how much circumstance dictates one’s experience of a nip. Often times, Stephen, John, and I sit together bandying bon mots and stinging critiques as we enjoy the water of life.
Recently, though, I was away on a business trip and was inspired to nip by myself and to see how the setting and my mood influenced my sense of the drink. In this case, the first impression is that of a meter maid, a dealer of sadness and dismay, ticketing a mid-class rental car while a pleasantly naïve tourist endeavors to drop it off.  Things go even more sour, as the formerly blithe spirit runs outside to remonstrate with the cracked-face troglodyte issuing the parking citation, and finds no trace of humanity. Bitterness descends like a fog over San Francisco, as the ticket turns out to run $53, which we’ll agree, is roughly equivalent to the cost of ten delicious nips.  The mouth is like the shocking betrayal of love for a place, and may well be likened to attempting to balm the spirit by surreptiously snogging the mouth of a recently acquired Singleton 12, swaddled in an anonymous small brown bag, while lurking in doorways in alleyways to avoid the sharp glances of passing police patrols.  One might say that the mouth is cloying and honied, nutmeggy and gnocchi-like, but really one wants to say that the mouth is like a haruspicy of animal intestines that showed that no arrests will be made.  The finish is akin to making a number of aggrieved, yet polite, phone calls to the rental company—which in an alternate Universe might be called “Bussfudget”—and finding that after the black bile subsides, the sunset glow of the words “Bring the ticket to us” limns the horizon. Some days, it appears that there is justice.

Rating:
–On the scale of unexpected salvation after a soul-impairing downer–
The Singleton 12 rates as the healing emerald light emanating from the halo of the archangel Raphael.