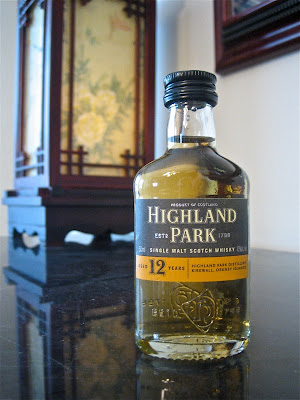 Tasting notes:
The greatest difficulty the Highland Park 12 poses is finding the right conceit to capture accurately its outstanding character.  The best way this humble reviewer can find to reflect the wonderfully satisfying, seamless integration of the host of complex parts that make up this dram is to offer a review that is as disjointed—if not as deconstructed—as the Highland Park 12 is well put-together.  So here goes:
Synecdoche: There’s a lot of peat on the nose, but not too much, so it wouldn’t do to refer to this dram as Big Peat—Medium Peat, maybe, but not Big Peat.  Nonetheless, it was a pleasure meeting you, Peat.
Obligatory simile (and paraprosdokian…and celebrity reference):  On the tongue, the Highland Park 12 is as smooth as Billy Dee Williams used to be—and remains to this day.
Sports reference:  In the mouth, the Highland Park 12 provides a most satisfying experience, akin to finally getting a fastball down the middle of the plate—or a full-bunger—and hitting the hell out of it.  If you’re not a sports fan, then try this one instead:  Obligatory (for me) macabre reference (and alliteration):  …akin to lopping off a head with one swing of a stunningly sharp samurai sword, slicing smoothly sideways through sinew and serendipitously slipping between vertebrae in the process.
Appeal to a sensation that, while basic and familiar, engenders abiding affection (along with an obscure product/commodity reference—and a little more alliteration for good measure):  Wafting onto the palate before the finish is the aroma of recently popped-up toast made from Peter Rheinhart’s Multigrain Bread Extraordinaire, just laid out on a plate and just begging to be buttered.  And no, that’s not a back-handed metaphor:  at some point before you swallow it, it actually tastes like toast—really good toast.
Paralipsis [yeah, I did just discover the wikipedia page for “Figures of Speech”–what of it?]:  And I won’t even get into how balanced and beautiful the finish is.
Appeal to authority:  As my fellow contributor John put it so eloquently, “It would be a good life in which this figured prominently as an everyday dram.”
And because I can’t pass up bringing it back (and when will I ever write a review so deliberately incoherent as this one, so as to allow for this move):  Self-referential goodness (from the Auchentoshan 12): simply, a stack of tires.

Rating:
–On the scale of figures of speech–
The Highland Park 12 is litotes–it’s not nearly as positive as superlative or hyperbole, but it’s not all that bad, either.