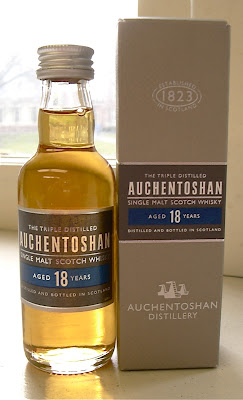 Tasting notes:
Nose of unsalted butter crackling in a cast iron skillet balanced on granite rocks over burning pine boughs in the High Sierra. Currants and radishes on the mouth in a salad tossed by an Iron Chef contender whose secret ingredient is tobiko. Perfect balance of conflicting flavors and hookah-cooled smoke: a veritable Scotch recreation of die fliegende Wallendas’ legendary highwire act. (Why don’t John and Stephen ever let me review the wretched exponents? Must be a conspiracy to keep me from the hunting of the snark.)  A long happy finish, first evoking Olympic marathoners turning into the stadium in front of the roaring crowds, the pheromones of excitement mingling with the sweat exuded as the epiphenomenon of the transubstantiation of Gatorade™ into exhilirating motion. Digging down deep at the tape, drinking in the accolades alongside the certainty of a gold medal, the finish line turns into a spandex nightmare, stretching out like some sort of giant Acme™ rubber band employed by Wile E. Coyote in a hapless attempt to ensnare the Road Runner.  Tensile strength unabated by the passage of time, the finish wraps itself around me like coiling cobras in a bhang-fueled fakir’s ecstatic ceremony, or long gauzy scarves dancing and floating like a Spinal Tap recreation of the highlights of a 1967 acid trip. This abandoned puppy is going to find an adoptive home in my desk drawer, directly between my strobe light and my Klein Stein.

Rating:
–On the scale of non-sequiturs–
The Auchentoshan 18 Land o’ Goshen rates as Shamu dressed in drag as a unicorn.   The DT’s?  No, just mind your PQ’s, IQ’s, and MG Midget.