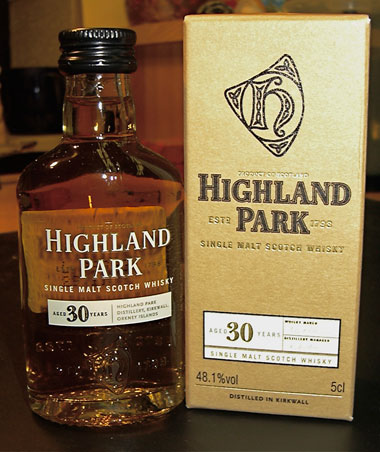 Tasting notes:
When he was 24 years-old, René Descartes recounts in his now-lost Olympica that he had a series of dreams, including one about a dictionary that he would interpret as giving him the inspiration for his later researches.  But another dream featured his expectation of a gift of a melon from a foreign country, which Freud thought pointed to a fear of his homosexual leanings.  Despite an unenviable nose, the Highland Park 30 invites us to savor slices of this curious fruit kept to the point of fermentation in a balsa wood case.  Or alternating shots of Calvados and limoncello at a bridge tournament tailgate.  Then a gradual transformation into spices tickling the tongue like an emery board lozenge.  Hot ginger syrup, a tablespoon of cinnamon, cumin-dusted cacao nibs, and the cardboard edge of a stiff-backed legal pad.  The incredibly long and complex finish has some of the peculiar tastes of an old brass instrument with a mouthpiece cleaned with witch hazel and mineral oil.  And it has all of the determination of a compulsive sousaphonist who empties the spit valves into labeled jars and runs her finger along the sweat-soaked pleather headband of her uniform helmet.

Rating:
–On the scale of fruits–
The Highland Park 30 is at the top: it is the cantaloupe.  Developed in Egypt, brought to the New World by Columbus, source of the best strain of penicillin, happily paired with prosciutto or ice cream, and covered with a reticulated skin, the Highland Park 30 has a lot to love.  And besides, sometimes a melon is just a melon.