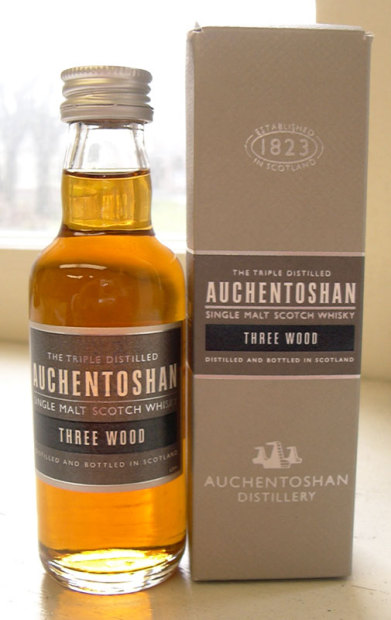 Tasting notes:
The moniker “Three Wood” pleads insistently–but no less annoyingly–for a carefully crafted golf reference (unlike the variant “Triple Wood,” which conjures up vivid images of…[insert innuendo here] …oof, even that was bad.  Moving on…).  Not ever having been one to give in to peer pressure, either teenage or literary, I will not accede to a golf reference here.  No, I will advance here a full-blown golf analogy:  The monster mouth and the indefinite aging of this dram are the stuff of folklore or maybe even a Grimm’s fairy tale.  In this way, the Auchentoshan Three Wood is much more like a troll’s mallet than a golf club. [Sorry if you were expecting a Tiger Woods reference…and no, this is not an ironic meta-reference to Tiger…really] And the nose on this Auchentoshan offering has about as much nose as you might expect this same troll’s mallet to have backswing:  you’ll give yourself a hernia before you find one.  Imagine that same troll’s mallet, the wood on its face splintered and stained with God-knows-what and the studded iron bands adorning the cylinder of its head slowly rusting through, striking the ball solidly.  Now image the golf ball is your face, and you have a clear sense of the mouth on this dram (If your powers of imagination tend to bump hard against the limits of realty, then try this: the mouth is freakishly similar to waking up to find that your somnambulistic college roommate has unwittingly used your mouth as a pencil sharpener).  The follow-through is, again, about what you’d expect from a honkin’ huge hammer a gargantuan, ill-tempered creature would employ as a weapon:  not much to it beyond its own momentum from before.  Still, overall it’s fair to say that this dram packs a punch–but one that’s about as smooth and balanced as you’d expect your swing to be if you decided to tee up with Grendel’s mallet.

Rating:
–On the scale of unbalanced things that used to be made out of wood, but no longer are–
The Auchentoshan Three Wood is the seesaw:  not as beloved as the top, but also not nearly as limited in its impact.  What other object of children’s play holds out the possibility of launching a small kid a good thirty feet–I mean, other than the trebuchet?