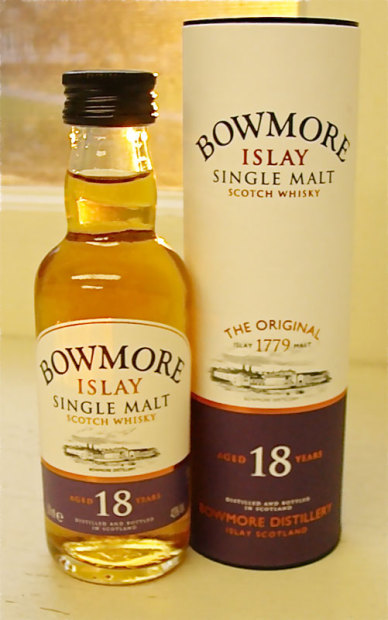 Tasting notes:
The Bowmore 18 gives new meaning and depth to the concept of a marriage of opposites.  From beginning to end, this excellent dram draws one inextricably and inexplicably from one side of the palate to another.  Early on, the thread, it seems, is the faintest hint of smoke:  on the nose, vitiated confectionary sugar made into a dark roux in an odd choice by the chef; on the tongue, dryads dancing in a grove by torchlight, until the fête inevitably gives rise to a fight.  Through the finish, the heavy iodine and light fruit flavors recall chance meetings of the organic and the inorganic:  a three-day-old cranberry orange biscotti soaking up a Campho-phenique spill, bananas foster dripping flaming syrup onto the steel cabling of a modern trebuchet set to launch the dessert halfway across town and in the mayor’s pool, the steel of a hatchet blade insinuating itself into the melon-like skull of an unsuspecting passer-by.  And just in case that profile doesn’t weave together enough contrasts for one, those late phenols turn out to be hydrophobic:  adding a little water to this dram chases away the medicinal qualities altogether, leaving behind, appropriately enough, a hint of pineapple.  Ultimately, the Bowmore 18 is one of those apparently strange combinations that works out wonderfully, like when you decide to go with cyanide, and it turns out your intended victim just happens to love the smell of almonds.

Rating:
–On the scale of wildly different things that synthesize into an amazing new thing–
The Bowmore 18 is New Orleans-Style Shrimp and Grits— it’s not quite Groucho Marx glasses on a Glencairn glass containing the Talisker Distiller’s Edition (though if you use Rosebank Gold Bohiket Grits, it’s very close to a tie), and it’s a world better than the spork, the European Union, or sexting.