Bill: As our loyal (and disloyal) readers know, the Whisky Extravaganza, usually the Boston edition, is perenially our favorite and most beloved event. There’s something about the frisson erupting from the meeting of the beserk epicurean hedonism of the Extravaganza overwhelming the lingering echoes of the long Massachusetts tradition of Puritanism, self-abnegation, and rigorous strictures of morality. (Oh, hi John!) 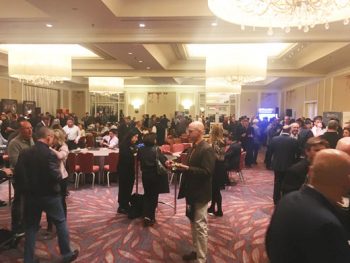 This year the venue was at the Hyatt, and although I took no measurements of the floor plan, it seemed as if it expanded to fill an entire floor. That, in itself, provided a distinct tickle of pleasure; no longer was the Extravaganza just part of a busy, thriving hotel scene. The Extravaganza was a floor unto itself. Also, it went until 10pm this year, and by my rights, if it had lasted another few hours, I think it would have been proper for it to have seceded from the United States and formed a new country. All hail the Extravaganza!

There were four masterclasses this year, and I was lucky to get into the No Age Statement (NAS) class run by Alex Thibaut, the Distillers’ Selection Brand Ambassador for Pernod Ricard. (I don’t think he appreciated that I kept calling him Coach Tom Thibodeau and asking him how the Minnesota Timberwolves’ season was going. Whatever.) The class was fun and educational, and to quote Alex, with an age statement whisky, such as a 12yo single malt, the master blender is painting with a palette of only blues. With a NAS, the master blender has every color available. On the Irish whiskey front, we sampled the Greenspot and the Redbreast Lustau. The joy of a class such as this is, that aside from pelting Alex with questions, and aside from learning interesting facts, such as that the Greenspot is all 8-10yo whiskies, while the Lustau is all 9-12yo, I got the opportunity to sit quietly and enjoy sipping delicious whiskies purely for pleasure. We followed those up with the Glenlivet Founder’s Reserve (6-15yo) and the Abelour A’bunadh (Batch 58, if I remember correctly), which is bottled at 122 proof. As Alex noted, “A’bunadh Matata!” 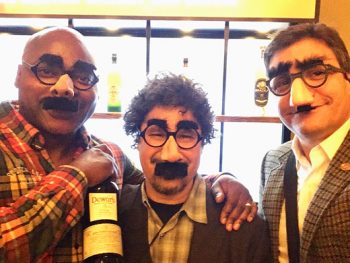 Bill and John with Colin from Dewar’s

After the class let out, I lined up with everyone else to enter the main event, put on by the IWSC Group, North America. I collected my glass, which was stemless, and crafted in a new shape that I loved. I bore in mind our hard-earned wisdom that laying down a base-layer of food makes for the best long-term drinking experience, and my eyes fell upon an amazing dessert table. I grabbed chocolates, pumpkin (I think) cheesecake, and several other delicious sweets. If it were in my nature, I’d have been embarrassed that I was sloppily wolfing down food when I stopped by my first tables, those of the Arran and Glenmorangie. I’ve never met an Arran I didn’t love, and it was the rekindling of an affair to enjoy the 14 and 17. At the Glenmorangie table, I couldn’t say no—I never can say no—to the Signet. While there,  I was alternately stuffing my face, mumbling, and generally being the sort of person you ditch as quickly as possible at a party.

Next, off to Craigellachie, Dewar’s, Macallan, and Highland Park, where I saw Sammy Karachi, and met Colin. We took a picture for Georgie Bell —hey, Georgie!— and had also the pleasure of seeing again Kimberly Shea, too, who was pouring Macallans. Colin poured me a Craigellachie 23, which is fantastic, and the soon-to-be-retired Dewar’s Signature, comprised of a select blend of spirits no less than 25yo. Delicious. Kimberly was pouring the Macallan Edition 3, which I was very eager to try. John showed up around then, so I’ll let him take the review over for a while… 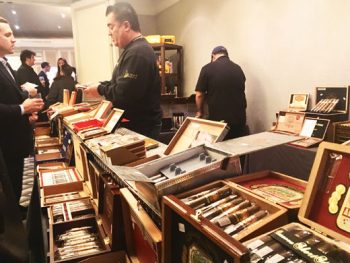 The Pop-Up Cigar Store inside the Extravaganza

John: ​After walking past a pop-up cigar store (on which more in a moment), I first ​ran into Randall Bird, who was pouring an old favorite,​ Lagavulin 16,​ along with a few other mainstays​. He had on his tartan and as always, it was a pleasure to catch up with him. Then I found Bill who was talking with Kimberley Shea.  She ​was pouring ​the Macallan Edition 3 out of its exquisite bottle, and she told us how Macallan planned to do six editions in total, each representing a different sense. The first was not sense-based; the next Edition will be ‘feel,’ and everyone is curious about what that will mean.

The Scotch Malt Whisky Society was there, of course, and had some wonderful offerings.  I tried a Highland Park, a Bowmore, and a Linkwood. All very good, naturally. 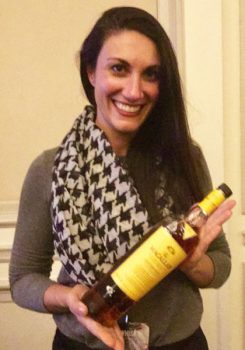 One nice feature of the event was that there were bartenders making different cocktails.  I saw one cocktail station from the rear, saw that there was Laphroaig and raw ginger and thought, “That’s penicillin!”  And it was. The guy made a really nice one–though ​it could have used more Laphroaig, it was really refreshing. That is definitely my favorite whisky cocktail. As I stood there with my cocktail, I looked around to admire the hotel and the remarkable cigar “store” that I’d passed by earlier. The cigar purveyors were knowledgeable and were conversing with folks every time I walked past.

We wandered about renewing friendships, sampling Glen Scotias and whatever we fancied, then caught up with local Hero of Retail, Bikram ​Singh. He was, as always, pouring a line of exotic and wonderful whiskies. What stands out in my memory is the Port Dundas 1991 from The Exclusive Malts. I also loved the Springbank 15, a Hazelburn with a Barolo finish, and a Longrow.  But really, had I been chained to his table like Odysseus to his mast, unable to draw closer to any other table, I would have been utterly contented.  ​ 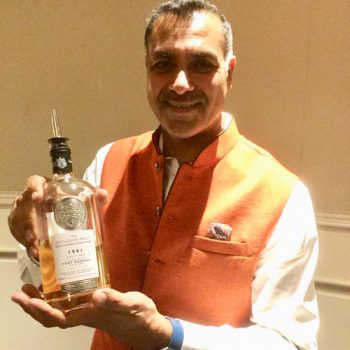 Bill: After seeing Bikram, and eating delicious “shot glasses” of Shrimp and Mac ’n’ Cheese, we found Alex “I’m not Coach Tom and our names are spelled differently” Thibaut at the Pernod Ricard table. He poured us a Redbreast 21, which is amazing, and the new, limited edition Greenspot Château Montelena, aged in Zinfandel barrels, which is also amazing.

John: There were carving stations for beef and turkey, and here’s something that sums up the night: Alex was also pouring a Glenlivet 21 and we just didn’t have the room to have a nip of it. Imagine that, being in the presence of so many remarkable whiskies that I turned down a Glenlivet 21, a whisky that I dearly love.

Bill: (Actually, John, I’m never surprised when you turn down something you love.) 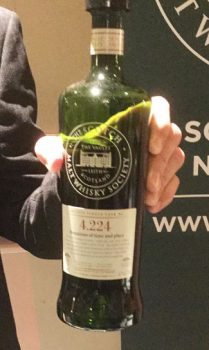 John: We visited also the Bruichladdich and Westland table, and…

Bill: My goodness, there was, as always, more than any three people could handle. And this year, for the first time, there were only two of us. (“I’m in Norway, remember?” said Stephen, petulantly. At least, I like to imagine it was petulant, but since it was an email, and there were no emojis, I’m not sure what his state of mind was.)

​John: Who cares about him?  But I will say that I missed not having a printed guide to the drams on offer, and there were not bottles of water that one could use to rinse a glass or dilute a cask strength spirit.  Still, the space made it easy to move around and see everything that was there, so a guide wasn’t as necessary as it might have been in another venue.  ​

Bill: On the scale of rebooted franchises, the Whisky Extravaganza, Boston Edition 2017, was The Force Awakens. The Shayne family’s run was the original Star Wars trilogy and the IWSC Group has brought us a compelling new trilogy, well, at least the first movie was compelling, and I have high hopes for the next ones.

John: What about the prequels?

Bill: The prequels DON’T EXIST, John. I don’t know what you’re talking about. (Why do you always try to spoil my ratings?)