The Whisky Exchange puts on an epic whisky show in London each year, and the 2017 edition of that show was the first I have attended. I imagined it would be epic, just because it was in London, and I was used to whisky shows in the United States. 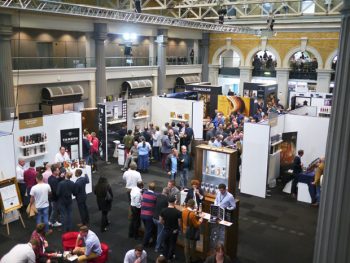 The event hall at Old Billingsgate

But when I showed up 30 minutes after the start time on the first day, I found a line of people, five across, that extended…and extended…as I continued along it…it extended more than six huge blocks in the Tower of London neighborhood. Six blocks of people! Not in single file, but five people across. It was particularly disheartening because I had begun at the entrance to the venue and walked the entire length of the line. I ended up standing in line for nearly an hour, but I met a handful of kind and colorful chaps along the way, and we made it into the Old Billingsgate Market much sooner than possible, given the number of people in line ahead of me. The second day, I arrived nearly two hours after the doors opened and walked right in (each day does run from 11:30 am until 6:30 pm, after all). Once inside, the venue did not feel as large as it must have been to accommodate all of those people. In fact, it was quite comfortable and never felt particularly crowded. 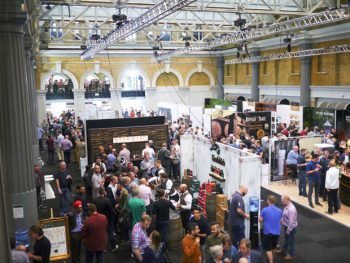 More of the event hall

Now, I should note at the outset that I attended both weekend days of the regular show, as well as the press and trade day the following day. And rather than give a blow-by-blow account of each day, I will here just provide highlights and key information for those who might be considering the show next year. On the latter front, the food was very tasty, but quickly became difficult to access easily. I ended up in another line for that on the first day, which was fine, both because it gave me a welcome break from imbibing, but also allowed me to make another set of new friends. Actually, the lamb was excellent, and the sides were wonderfully starchy for one trying to soak up alcohol to allow enjoyment of the rest of the show. 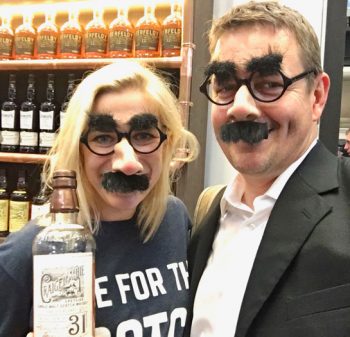 with Georgie Bell of Bacardi

We at The Malt Impostor have been involved in whisky blogging and writing for over 8 years now, and in that time, we have made many friends, including many via social media whom we have never met. The TWE London Whisky Show allowed me to move many of those friends from the “Never Met” column over to the “Well Met” column, which turned out to be one of the great unexpected pleasures of the show for me. But it was also great to see many old friends again, like Georgie Bell from Bacardi, who graciously posed in the Grouchos with me.

The masterclasses required separate registration and additional cost, but they were fairly well organized and were held both in a corner of the main hall and in meeting rooms overlooking the main event. I attended a Glenmorangie masterclass starring Dr. Bill Lumsden called “The Art of Innovation.” Among the attractions were the famed Truffle Oak expression, which was as good as all the hype about it would suggest. Several of the other expressions, each featuring a different sub-species of oak, were less impressive. Least impressive among them was the “Post Oak,” so named for an oak previously deemed only good enough for making posts out of, which should have been a clue as to how it would turn out. Overall, the masterclass was well worth the additional money I spent to attend it. 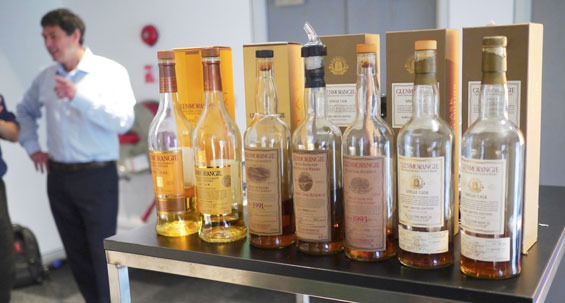 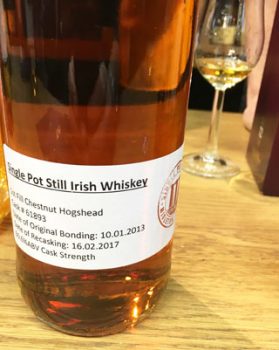 As an aside, while on the subject of weird woods used to make whisky, I tasted a Midleton experimental expression that had been finished in a hogshead fashioned from chestnut wood. It was wonderfully weird, but far from wonderful.

But perhaps the most amazing thing about the TWE London Whisky Show was the full whisky shop set up inside of the event hall. It was next to the free coat/bag check (another very nice touch), and basically, customers selected from lists of whiskies, and one of several helpful Whisky Exchange employees went and found the whiskies they wanted, and customers paid right there and carried their whisky away. I had never seen anything like that before, but then again, I’d never been to a massive whisky show put on by a massive online whisky retailer before, either. In other words, these guys know what they’re doing. 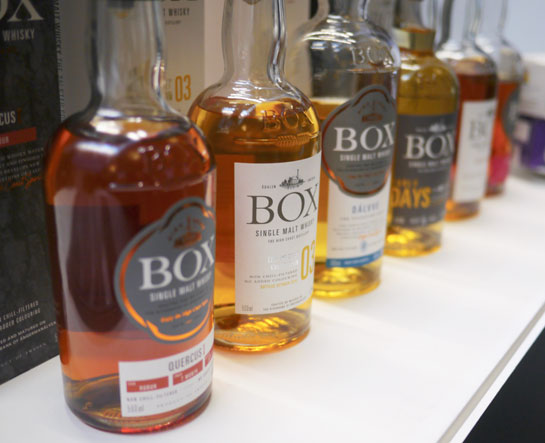 The range from Swedish distiller Box 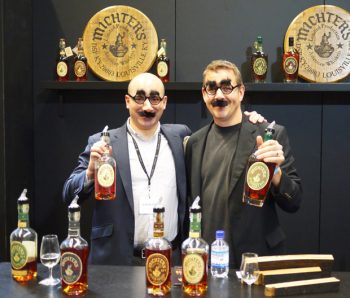 With Matthew Magliocco of Michter’s

Beyond all of that, there were truly special whiskies on offer, almost all of which were available to any attendee who showed up and asked for them. There were also “dream drams,” which cost a token or two or eight each (actually, only one cost 8 tokens, the Glenmorangie Pride), on which customers could spend the token that came with their admission or buy additional ones for £10 each. The list of dream drams was impressive, which made for some hard choices. 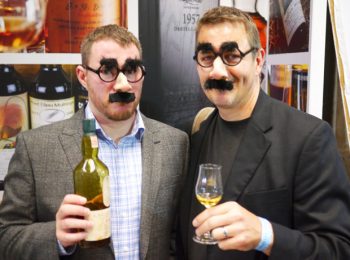 And it was a great thrill to finally meet Angus, the man behind the Onion of the whisky world, Whisky Sponge. And he was more than happy to commemorate that auspicious meeting with a photo. Of course, there were many other highlights, a fact to which the photos below clearly attest.

Overall, this was the largest and most impressive whisky show I have ever attended. I mean, my last dram of the event was a 42 year old Ardbeg from Signatory! This event had it all, and then added in some things you didn’t think it needed, but were happy to see nonetheless. The Whisky Exchange simply knows how to put on a massive show. I am already looking forward to next year. 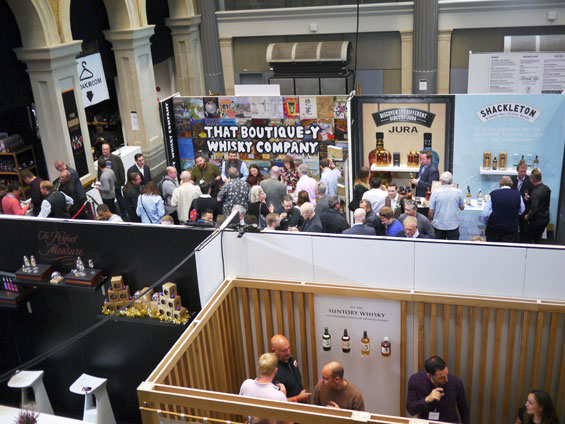 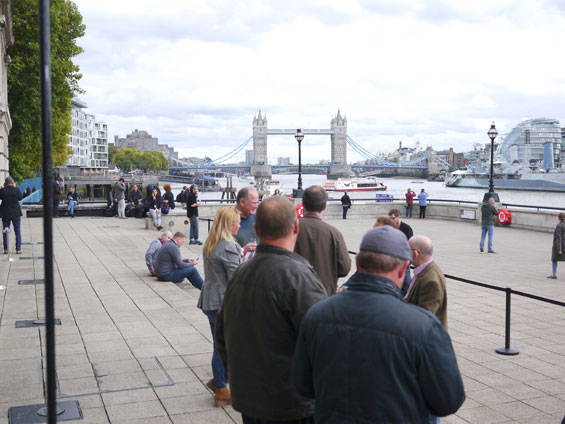 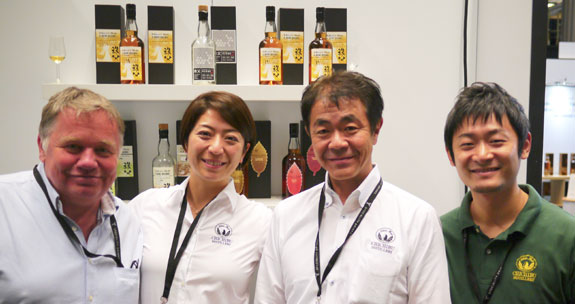 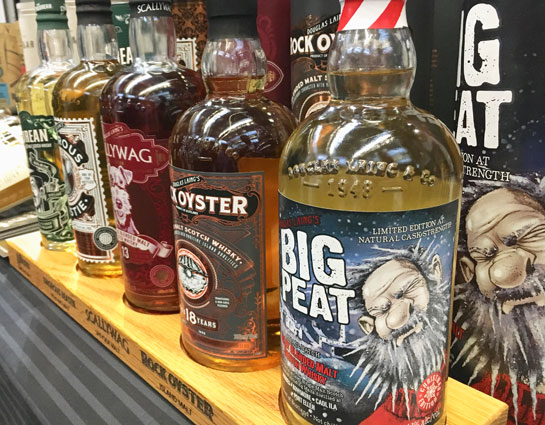 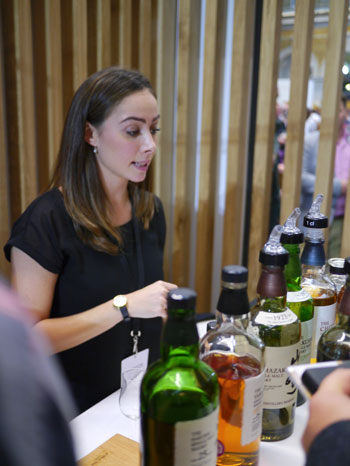 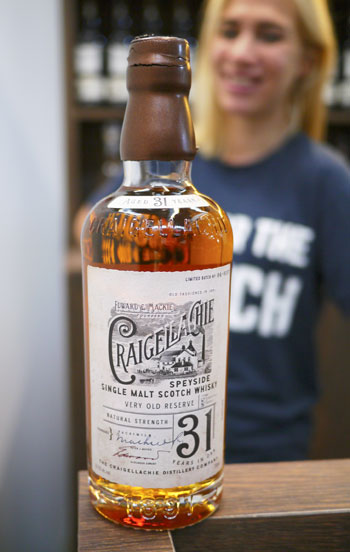 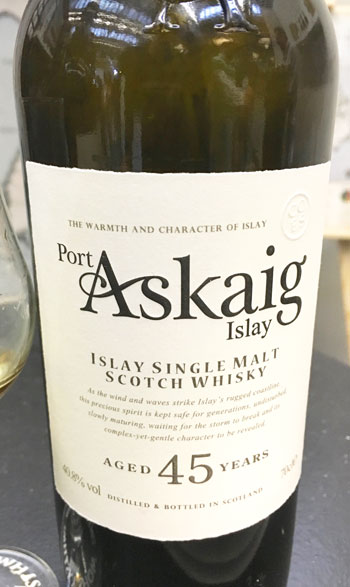 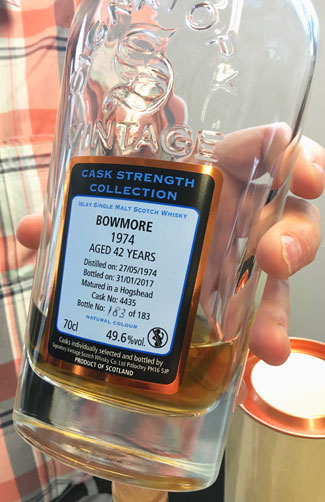 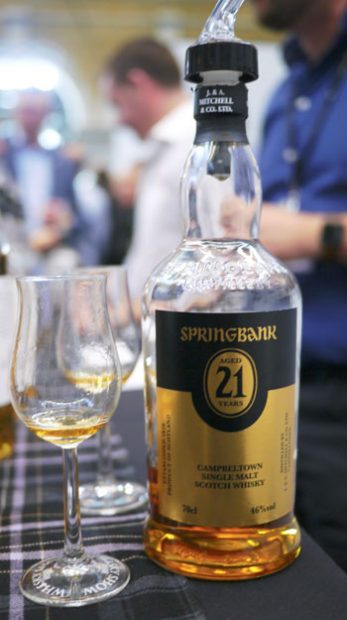 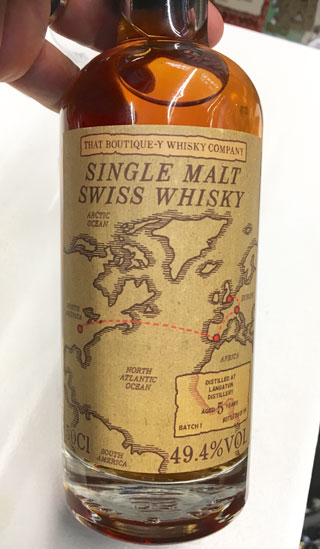 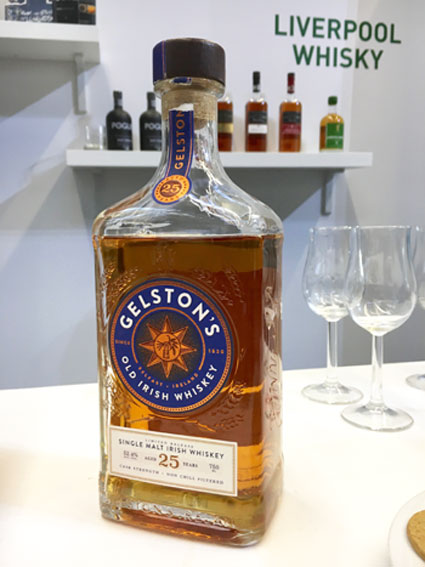